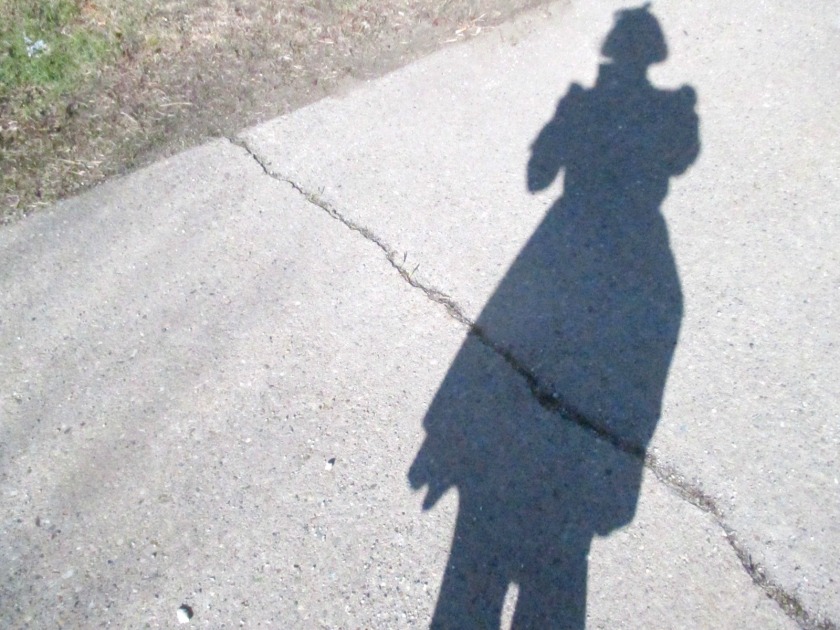 I’m sick. I don’t have much to say. I’ll let these speak for themselves. If nothing else, I can always fall back on spooky-cute. 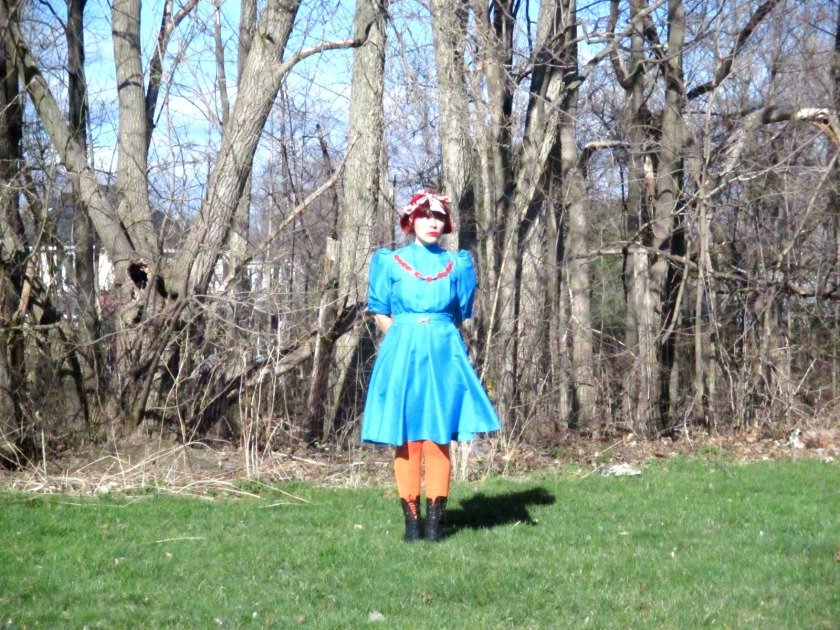 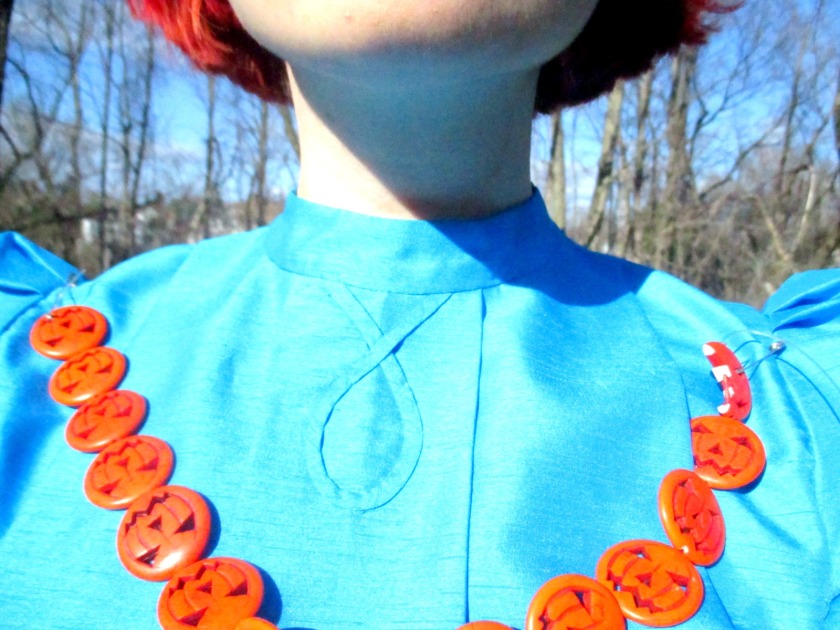 Josh and I turned ourselves up to 11 for Green Mountain Cabaret’s ’50s-themed show last Saturday. I did my usual pinup thing. Nothing too new to see here, except this godforsaken dress I picked up at Junktiques for EIGHT DOLLARS. One would assume Hell Bunny or ModCloth. Nope, just my neighborhood junk shop. God I love Junktiques. Its owner also operates a pay-what-you-can cafeteria called Psychedelicatessen, which I suspect is secretly some kind of speakeasy-cum-opium-den. I really enjoy Burlington.

Josh, little shit that he is, insisted that “the century was never specified!” We ended up as “1950s meets 1850s”. I love these shots of us – not least because we both really, truly look like ourselves. The versions that live in our heads and occasionally get realized in the real world. Possibly my favorite thing about Josh is his understanding of that head-Skye. He knows who I want to be, and every day he helps me be her.

I’ll take the opportunity to mention that yesterday was our first anniversary, which makes today our year-and-a-day. Today is far worthier of celebration, fae that we are. 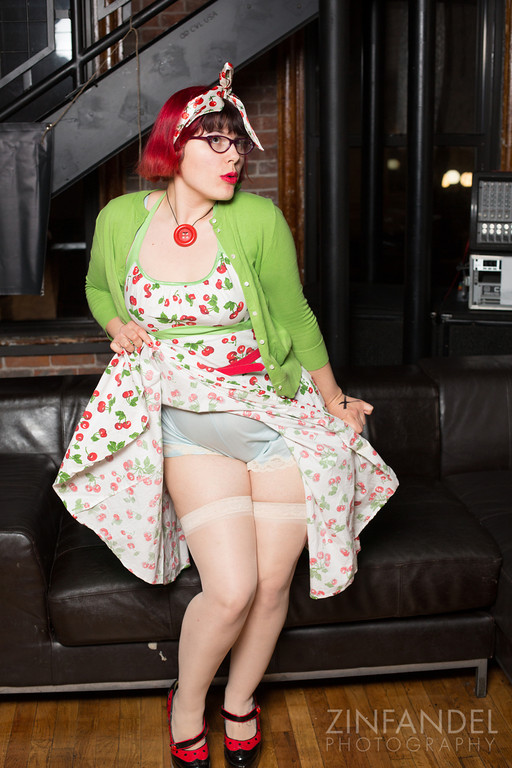 My friend Bee calls it “millennial androphilia”. You might know it by that name, or by another, or by the subtle understanding that you are probably not taken seriously. It’s in every article about how boys really want “guys’ girls” and how we should leave heavy makeup to the high-drama whores. Have you ever noticed how often “natural” is code for “masculine”? “She’s so natural; she’s so down-to-earth, she’s not fake.” As though femininity were an artifice, something we peel back to find the “true” (i.e. masculine) state of being underneath. As though it can only ever be a performance – never an identity. 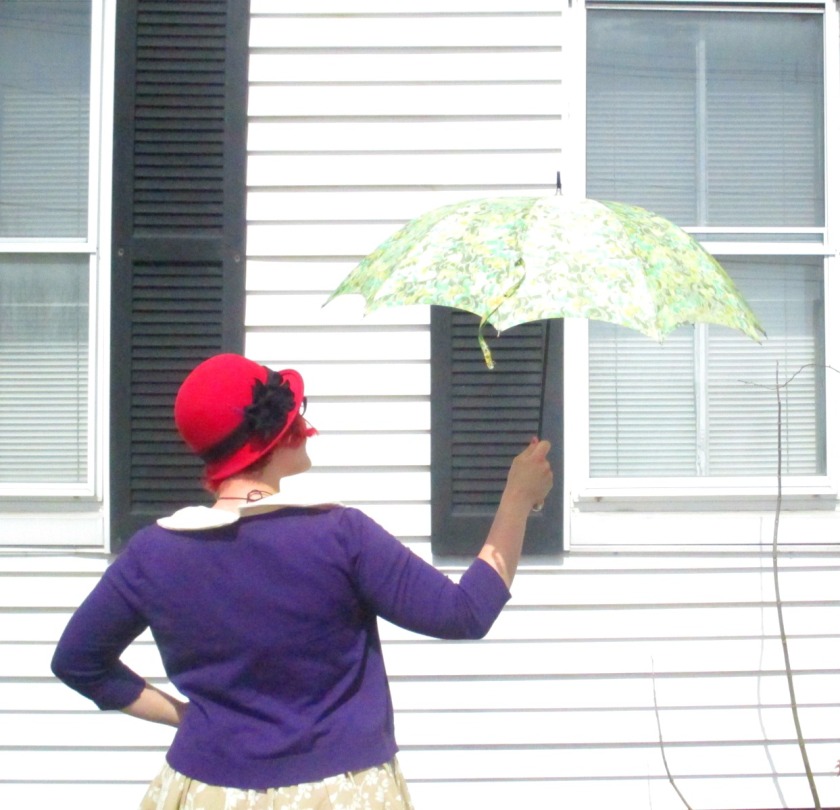 Let’s impale those old canards. Twist the knife and let them bleed out. Because I’m sick of having my essence smirked at before I even open my mouth. I don’t perform femininity to be ironic or because I don’t know any better. I’m not waiting  for some brocialist to liberate me from my own choices. Equating femininity with weakness is nothing new. It’s not progressive.

Zooey Deschanel summed it up. “I want to be a fucking feminist and wear a fucking Peter Pan collar.”

“A woman being sexy doesn’t make women part of ‘the sex class’; refusing to see a woman as a powerful individual because she’s sexy absolutely does.  It says that her sexiness speaks louder than her actual voice, that who she is sexually tells you everything you need to know about who she is as a person.” I will forever repost this, because it will never not be true. If you claim to know my mind better than I because I am twee, because I wear pink, because I am sometimes naked, then you are no better than those you claim to protect me from. 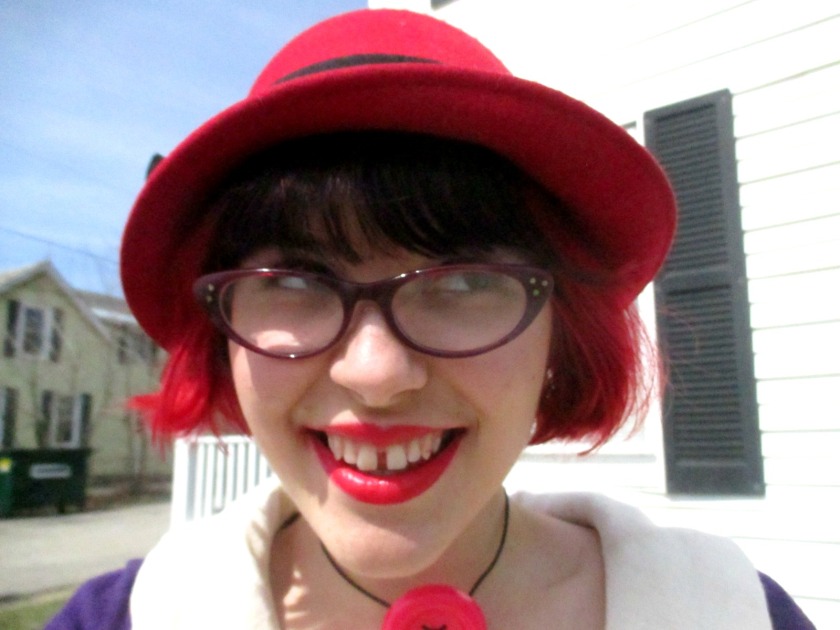 This is my fed-up face. But I’m also pleased because I got this dress for $12 at BSJ, and it turned out to be the creation of a very small Toronto clothier that folded last year. They only ever sold 158 dresses, and I own one of those 158. 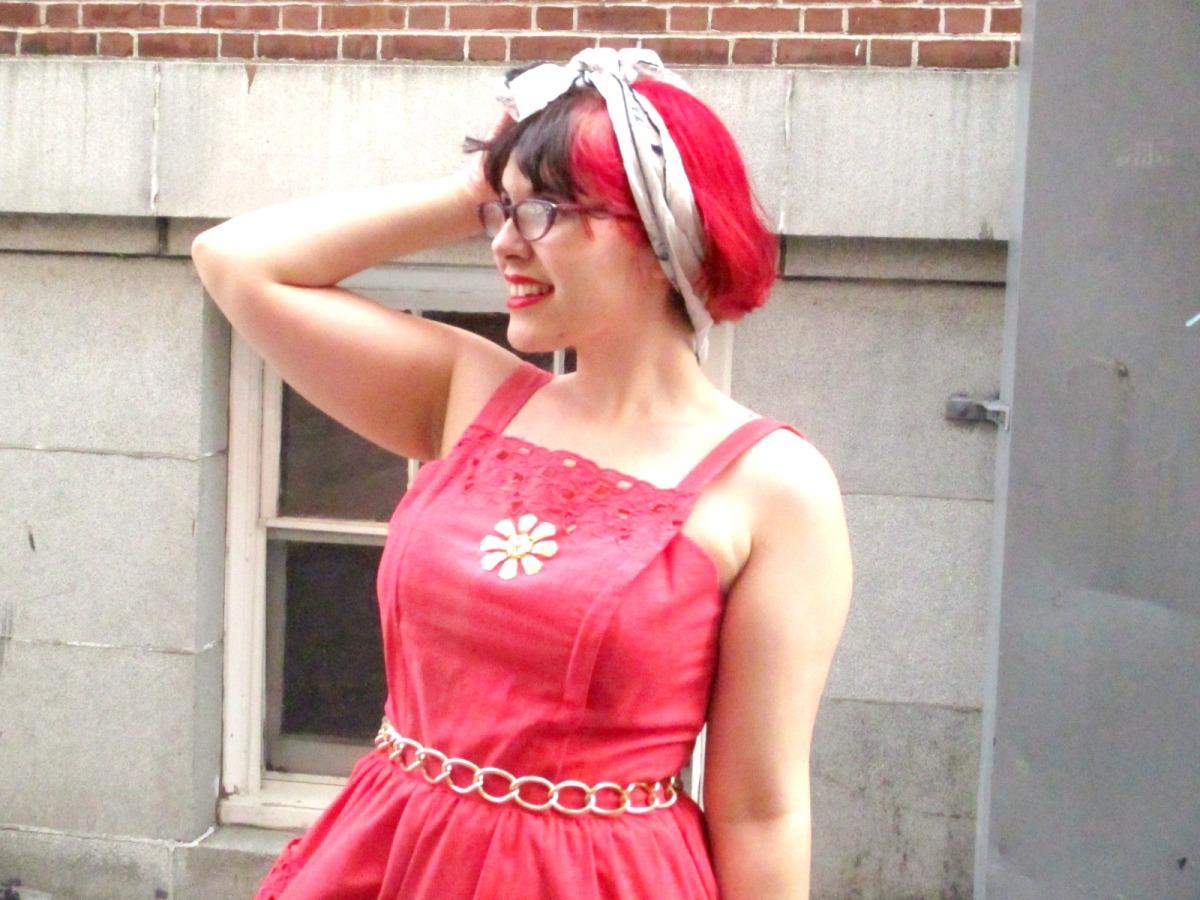 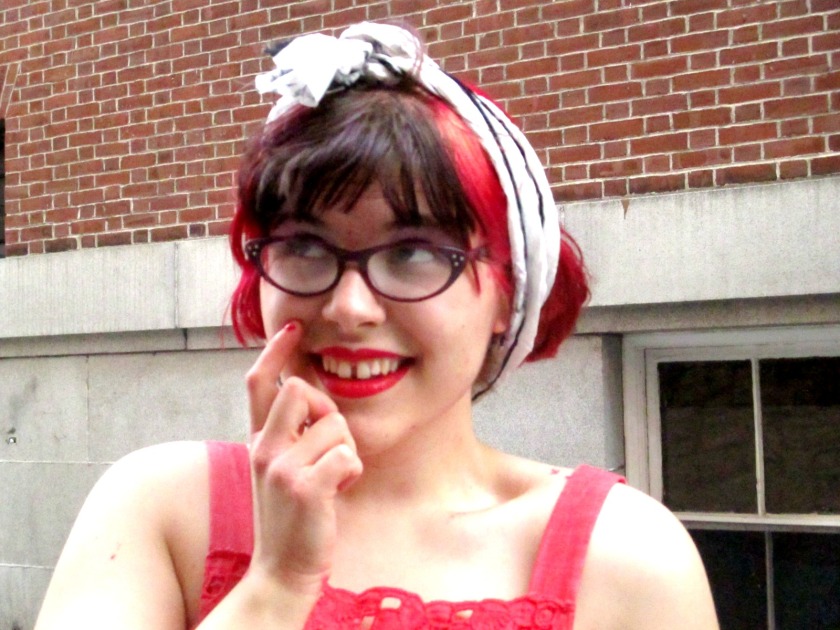 I feel more like me than I have in months. Pink is my natural hair color. I feel like a rockabilly Cruella de Bright.

I just love pulling a dress from a pile or rack and seeing that good ol’ “ILGWU” stamp on it. The International Ladies’ Garment Workers’ Union operated from 1900 to 1995. Their signature instantly adds to a garment’s appeal. It’s a clear indication of history – see Kristina’s post on dating ILGWU labels. The pink confection above features a gray-blue label, making it ~50 years old. I also feel honored to wear something made to last, under ethical conditions, by women sneering at convention and earning their own living. That, and it’s pink. Everything I’d like my style ethos to embody.

I want clothes made with pride and worn with pride. Is that so much to ask? 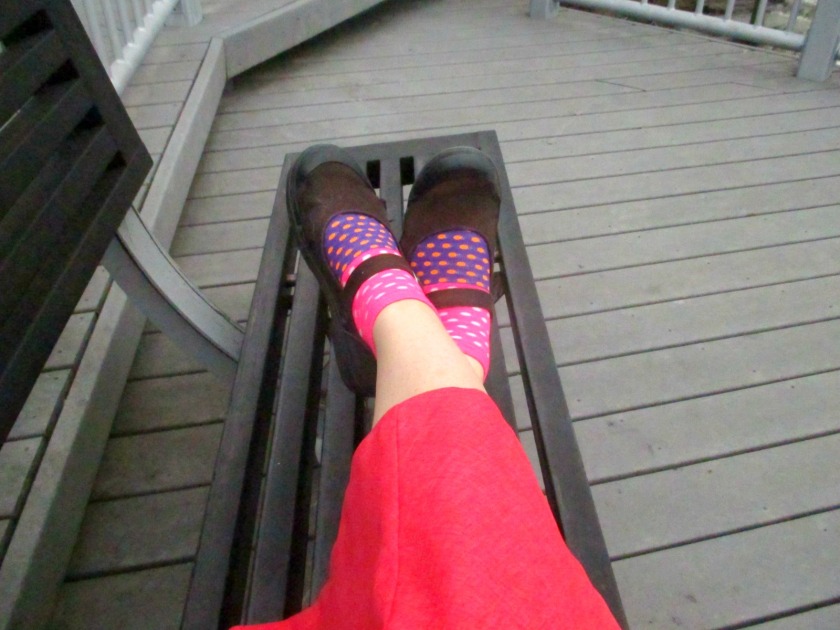 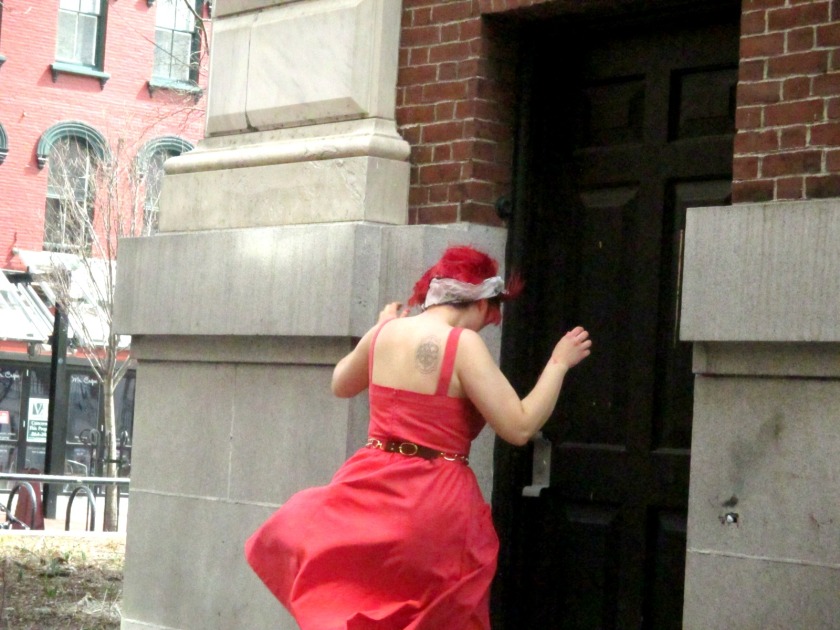 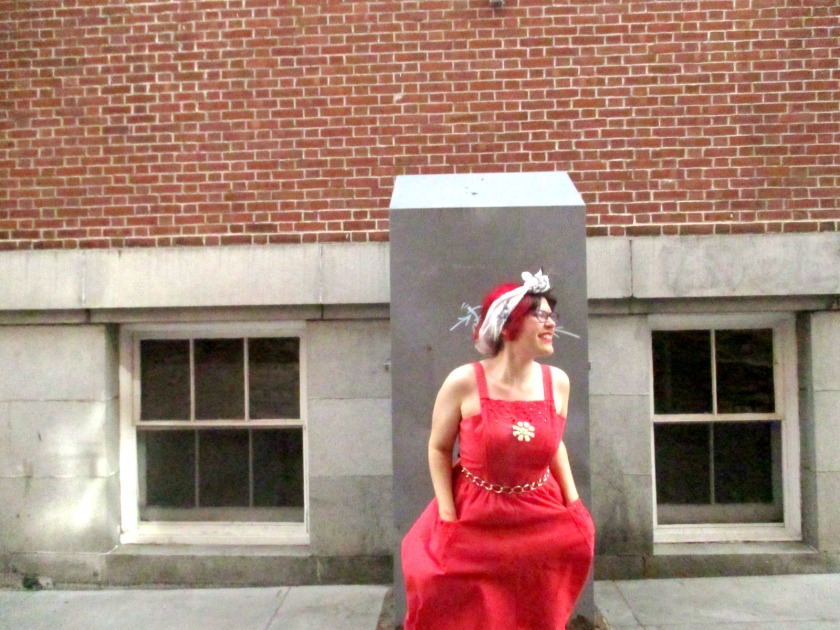 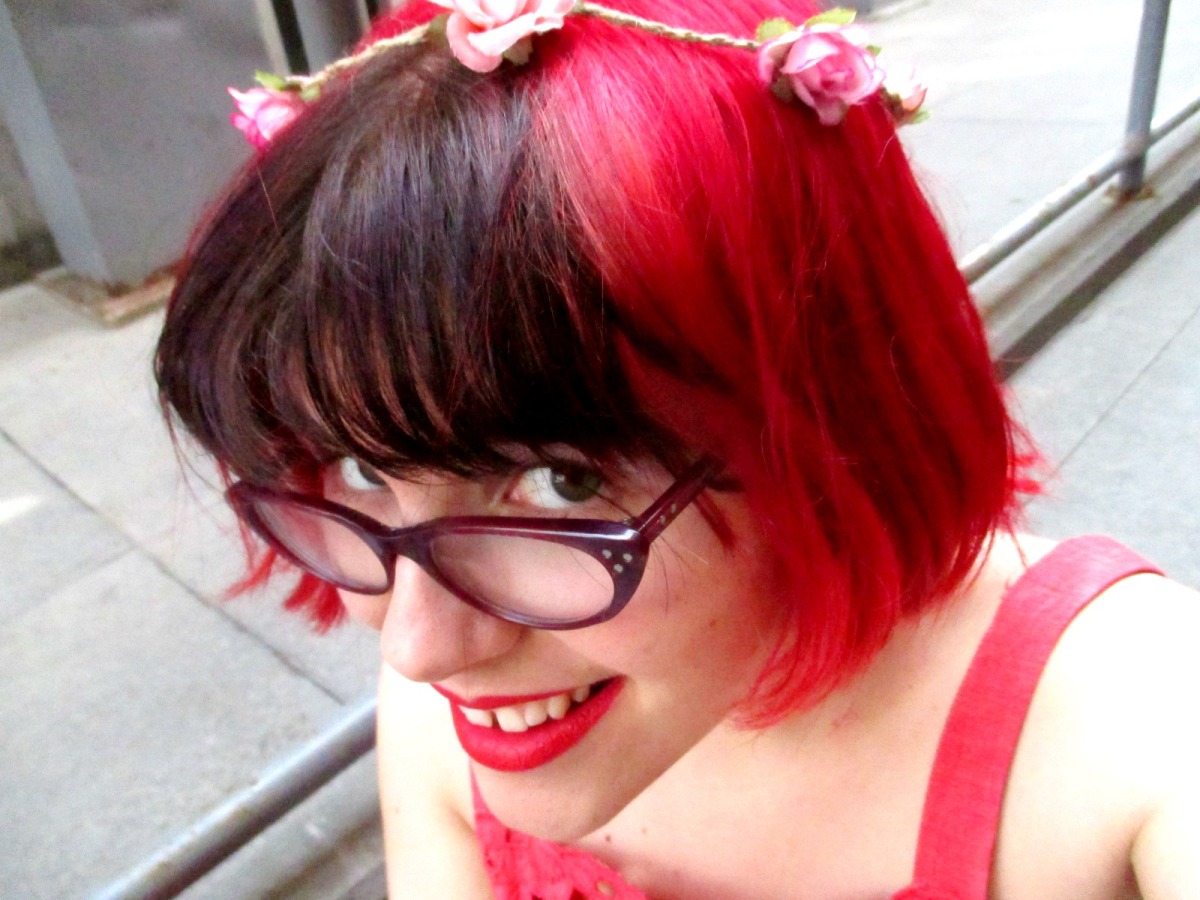 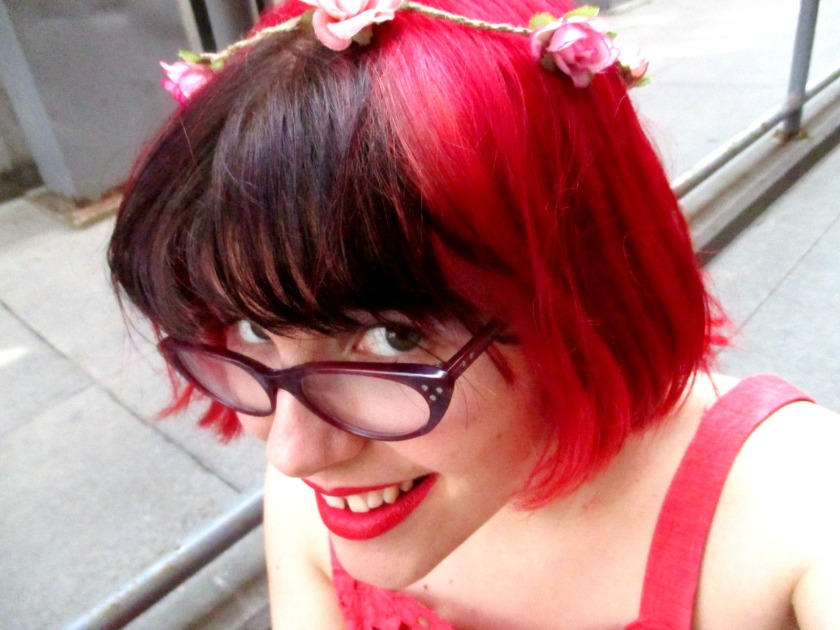 Black hair made a nice disguise. It swaddled and coddled me through a harsh winter. But pink is who I am.

I had promised myself I’d refrain from bleaching until I got a professional’s eye on my technique. Last night, though, I got sick of waiting. Maybe drugstore dyes will fry my hair, but going without my signature color does far more of a number on me psychologically. Pink is my natural color. I feel like pure, unadulterated, 100% me, and I refuse to sacrifice that.

Real outfit photos to come tomorrow. In the meantime, enjoy my fancy follicles. 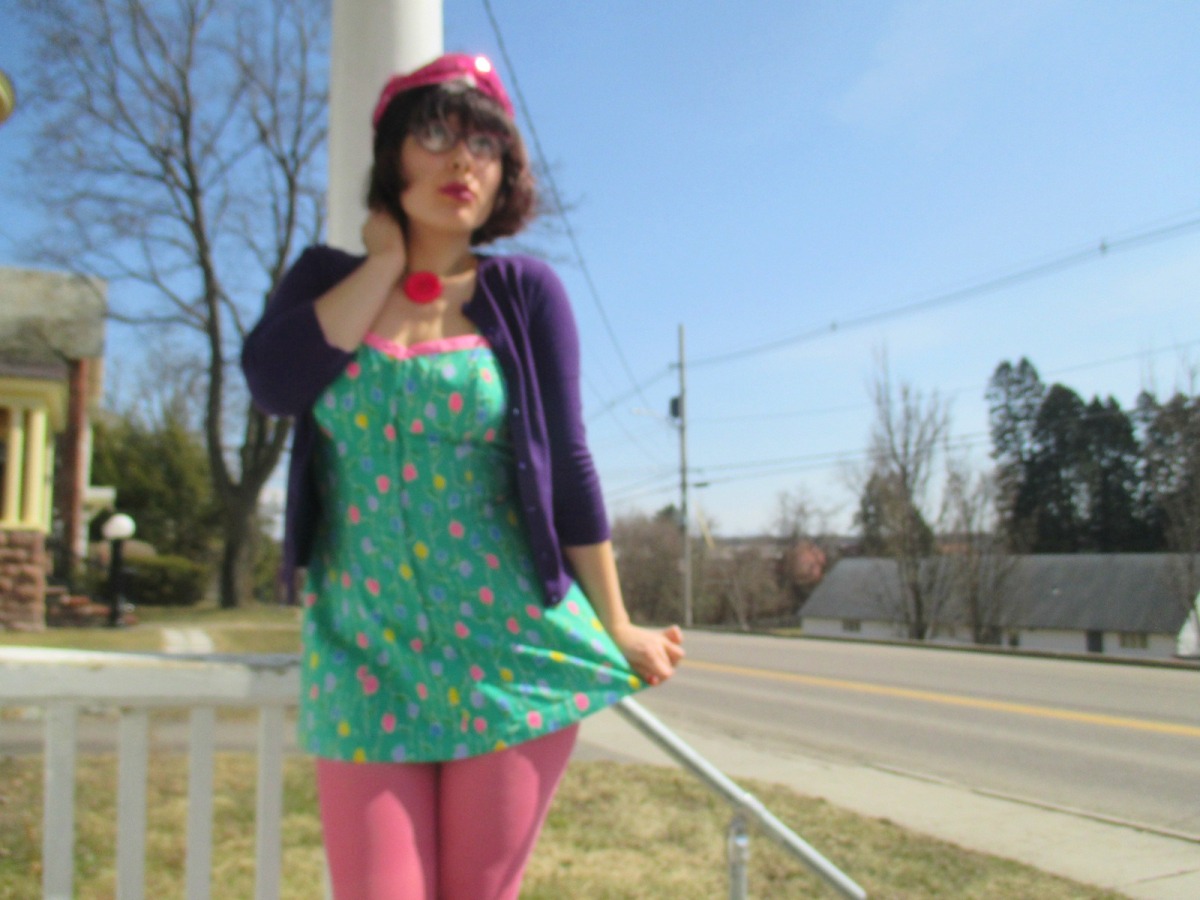 These photos feel like old Polaroids unearthed in some withered granny’s attic. Her youth came tumbling forth in tandem with modish darlings and the British invasion. She didn’t escape Burlington’s pseudo-suburbia very often. Still, she followed the ebb and flow of style,  hoping for somewhere to wear her bright new shinies. The epitome of “all dressed up with nowhere to go”, she’d pose on her porch, girlfriends eagerly manning the camera.

“Do you think I look like the mod squad?”

tethered in the balance of sea and sky

of awake and merely alive 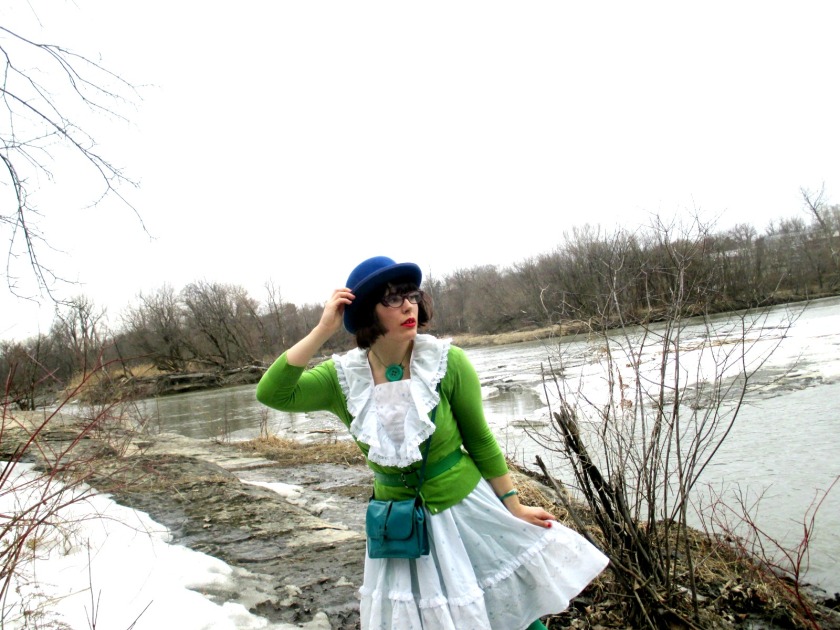 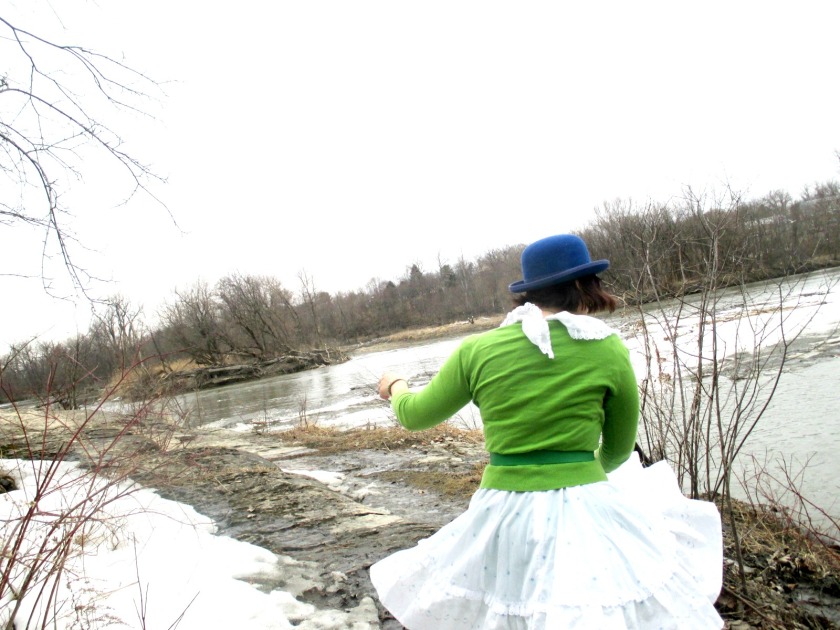 pare down elysium and tartaros:

into a humble human whole. 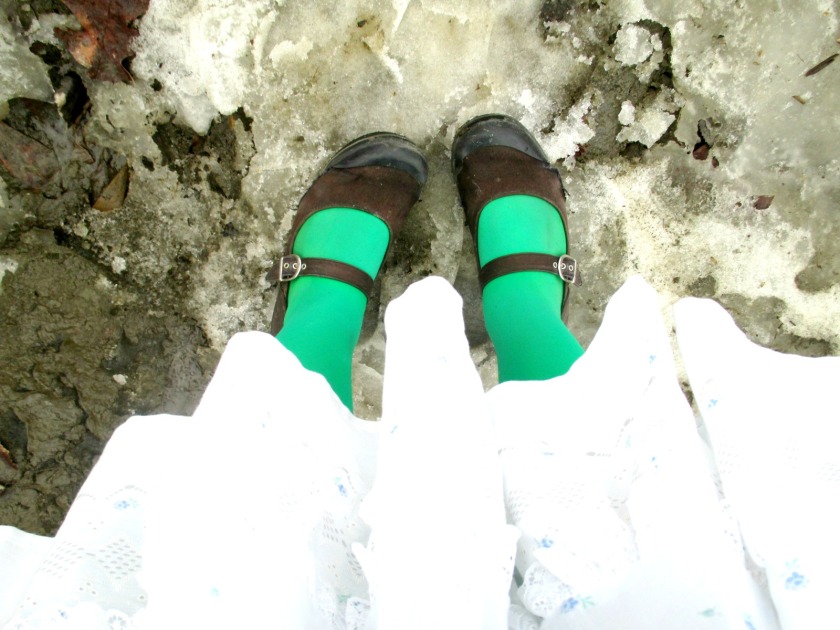 carrying discernment in the pads of 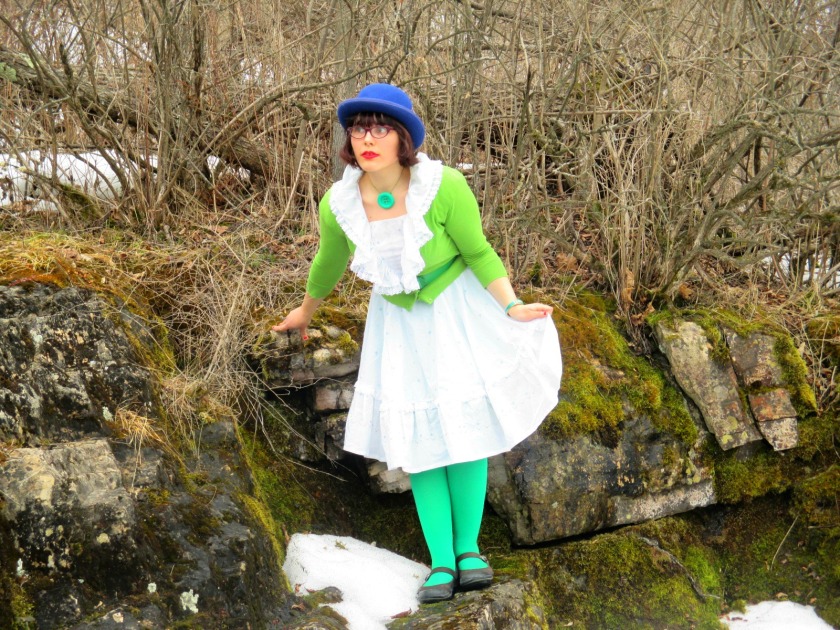 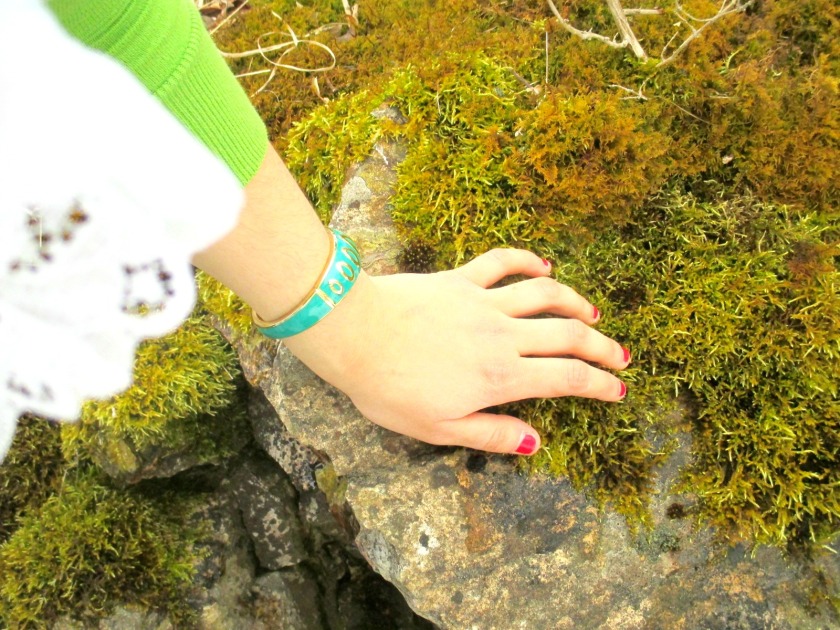 and map a tiny galaxy

beneath the skin of every world. 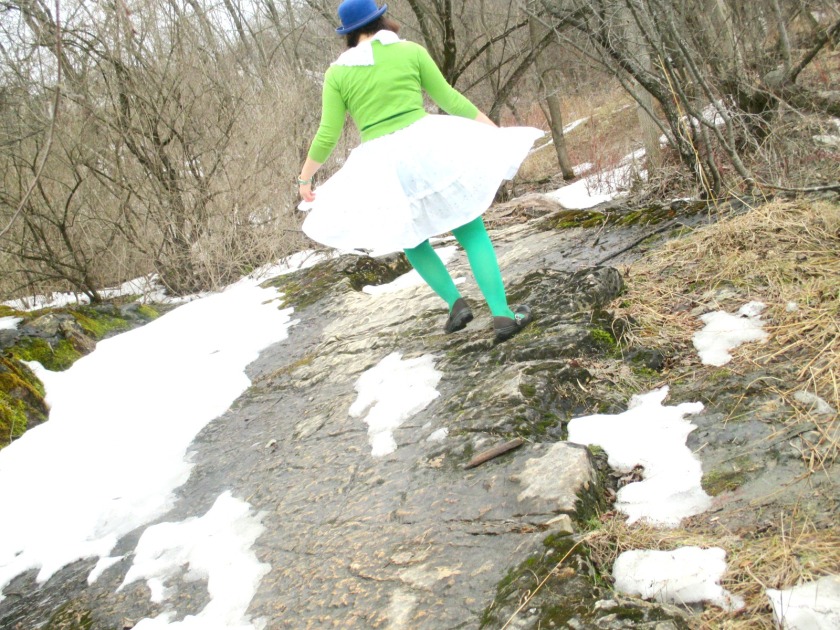 Can we talk about what a bombshell I feel like? I can practically hear the records scratching and spinning while some Hollywood rogue dips me at the waist. He ignores the rip in the fabric of the universe my time-traveling has created; I ignore the fact that he’s probably a figment of my imagination. We’re all good.

This is Josh’s favorite dress on me. He badgers me to wear it basically every morning. But I have to keep at least a few garments sacred. As ostentatious as I am on a daily basis, even I save a dress or two for truly special occasions. A little mystery and a little novelty never hurt anyone.

I pulled out this one on Saturday night for the birthday dinner of one of my best and oldest friends. Josh went full top-hat-and-tails and stroked my fishnets under the table. I’m used to my position as the most formal of my circle. It was nice, just this once, to look around the table and see bow ties, made-up faces, and sweetheart necklines. We’re already kindred spirits, but this time we actually looked the part.

You know how every inch of melted snow can feel like one step closer to liberation? You know that one pivotal morning, sometime between calendar spring and the first actual blooms, when you wake up and fully feel what you’ve shucked off? The morning when the distance between you and seasonal affective disorder is suddenly infinite, measurable only in floral dresses, seven o’clock sunsets, and not wearing a coat?

That was this morning. Today is good day. 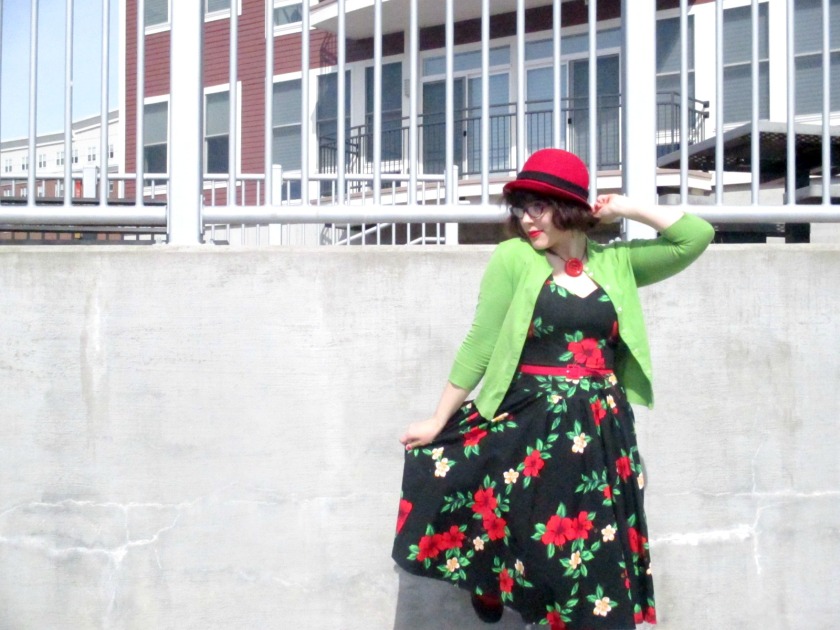 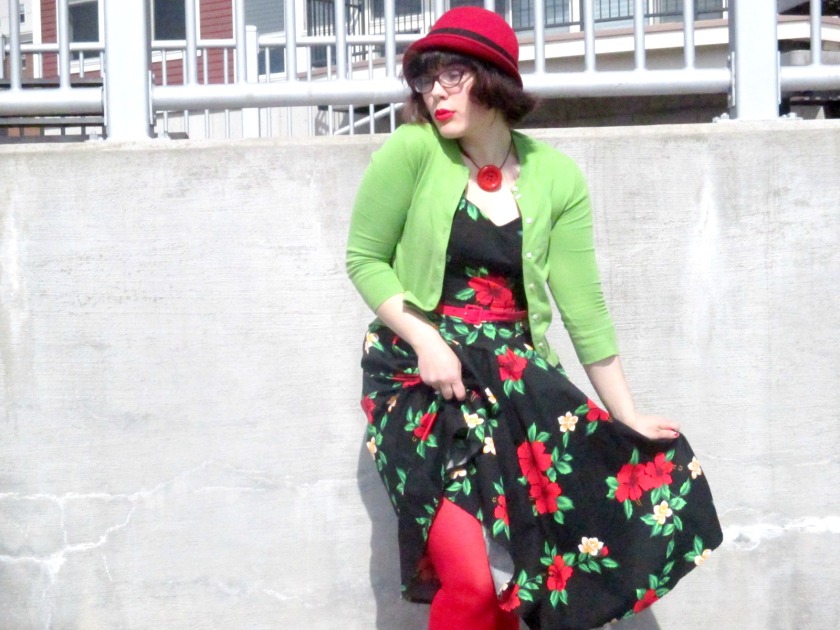 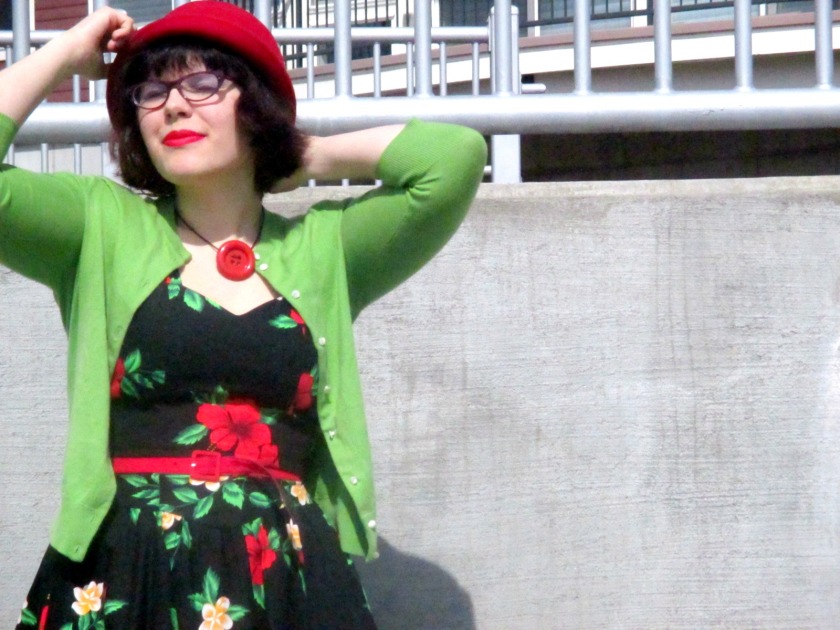 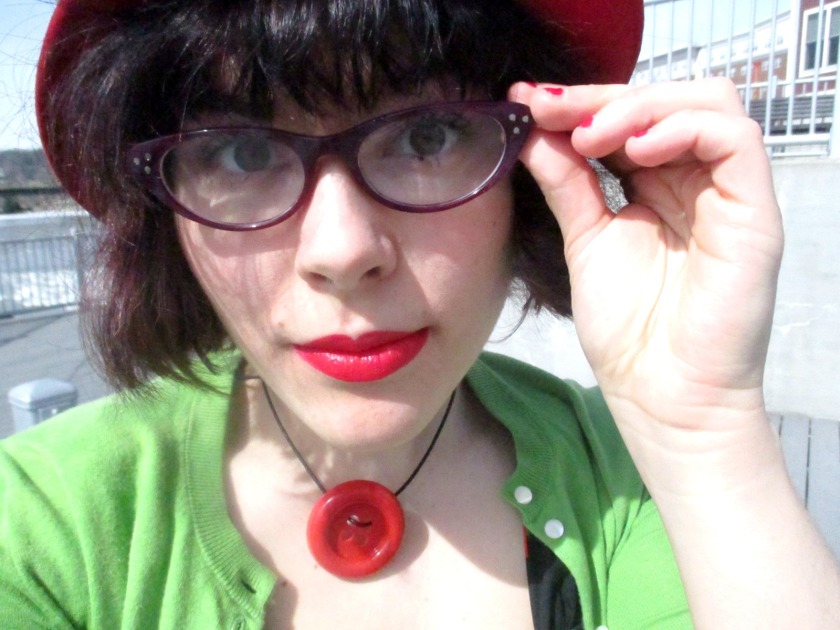 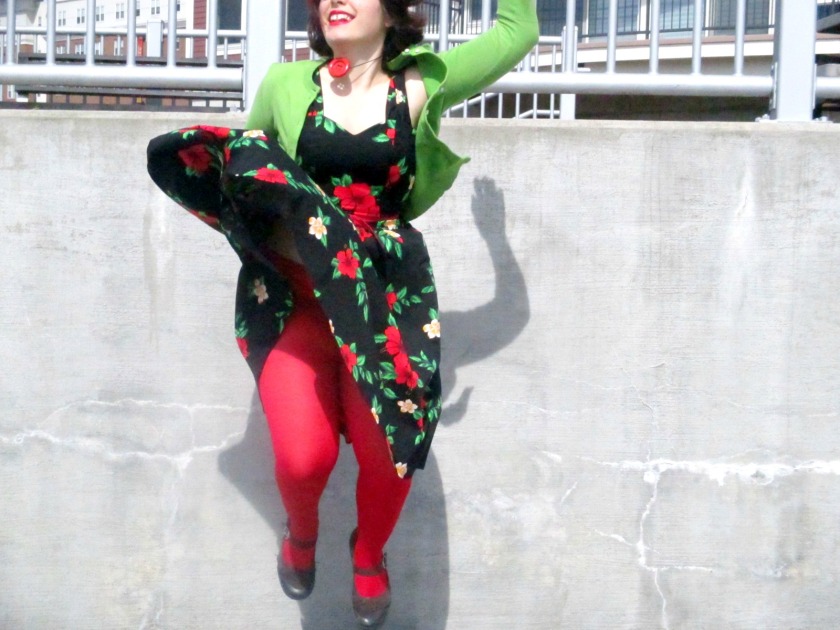 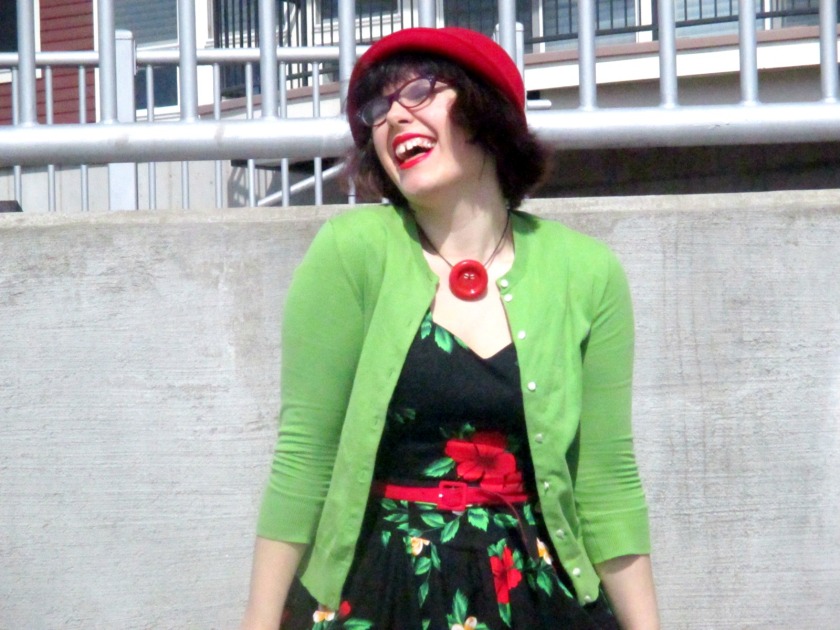 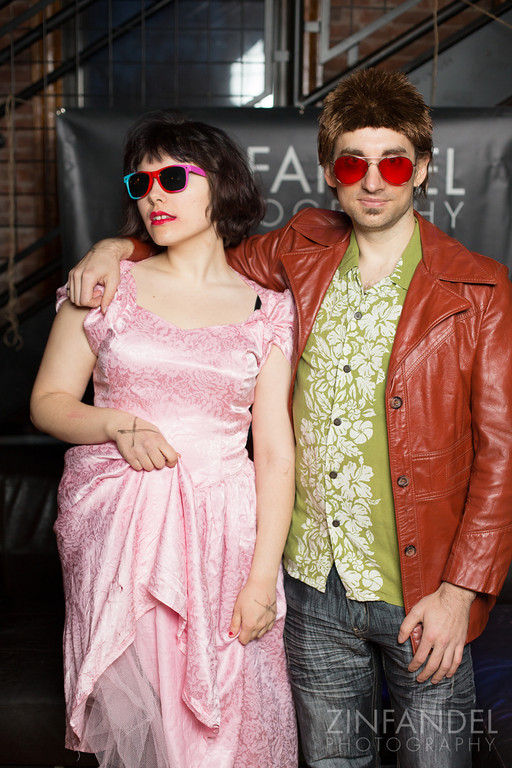 This past Saturday, Josh was slaughtered on GMC’s stage. Our friend Sarah, one of their featured dancers (“sugar shakers”), enlisted his roguishness for a combat number. I’ve never seen him strut like he did that night – and we’re talking about a man whose ego has its own magnetic field. Sarah’s boyfriend Gregg and I showed up hours early for front-row seats, hoping for a wink from our lovers. “I wanteed to toss my vest out to you,” Josh told me later, “but stage management nixed it.”

Each number was a tribute to a different cult classic. In Josh and Sarah’s case, Heavy Metal. I also identified Repo: The Genetic Opera, The Girl with the Dragon Tattoo, and Doctor Who. Other than that? I was lost. I can identify vintage from any era, but damned if I don’t live under a pop-culture rock. Hell, burlesque shows are about the only getting-out I do.

I love burlesque. I love the whole mad eroticism of it. The skewed axis on which your world operates for one precious evening, where naked butts are normal and catcalls become a good thing. I love the melding of sex and art – and the absinthe doesn’t hurt, either. I’ve been taking classes for six months. Mark me – one of these days I’ll be a stage kitten.

Anyhow, Gregg and I got our own spotlight later that evening, when our respective Tyler Durden and Marla Singer were hauled onstage as the winners of the costume contest. Infinite credit to Zinfandel Photography! 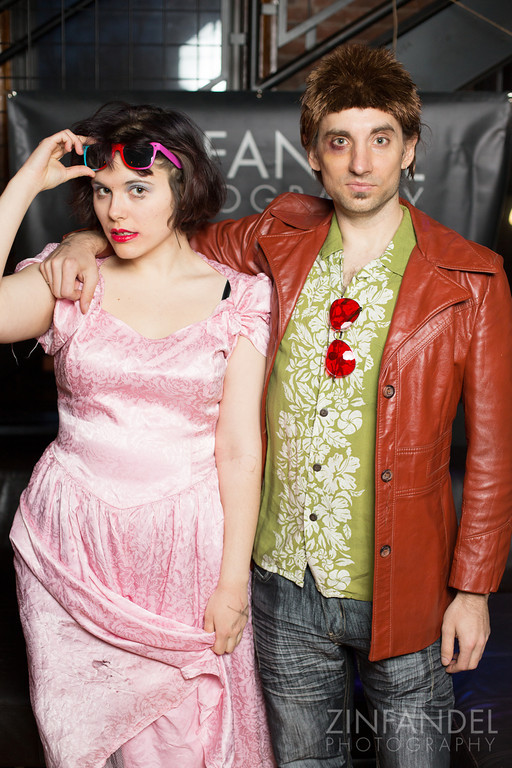 Helena Bonham Carter allegedly asked Fincher and co. to give her the most haphazard makeup they could, because she didn’t think Marla would care about such things. I don’t know how to feel about this, given that Marla’s makeup isn’t too different from my normal palate.

Gregg and Josh could damn well be brothers. We joke (but it’s not really a joke) that he and Sarah are Josh’s and my bizarro-world equivalent.

Next month’s theme is nifty fifties! Knock on wood, but that costume contest will be MINE.