This post is, oh, six months in the making. Longer, if you count how long it’s been a pipe dream. But six months is when I started working in earnest. My partner is crazy for everything Victorian, and his enthusiasm is catching; I’ve long wanted to join him in his preferred era. This past April, I remembered that I own Kristina Harris’s splendid 59 Authentic Turn-of-the-Century Fashion Patterns, and I set immediately to work. 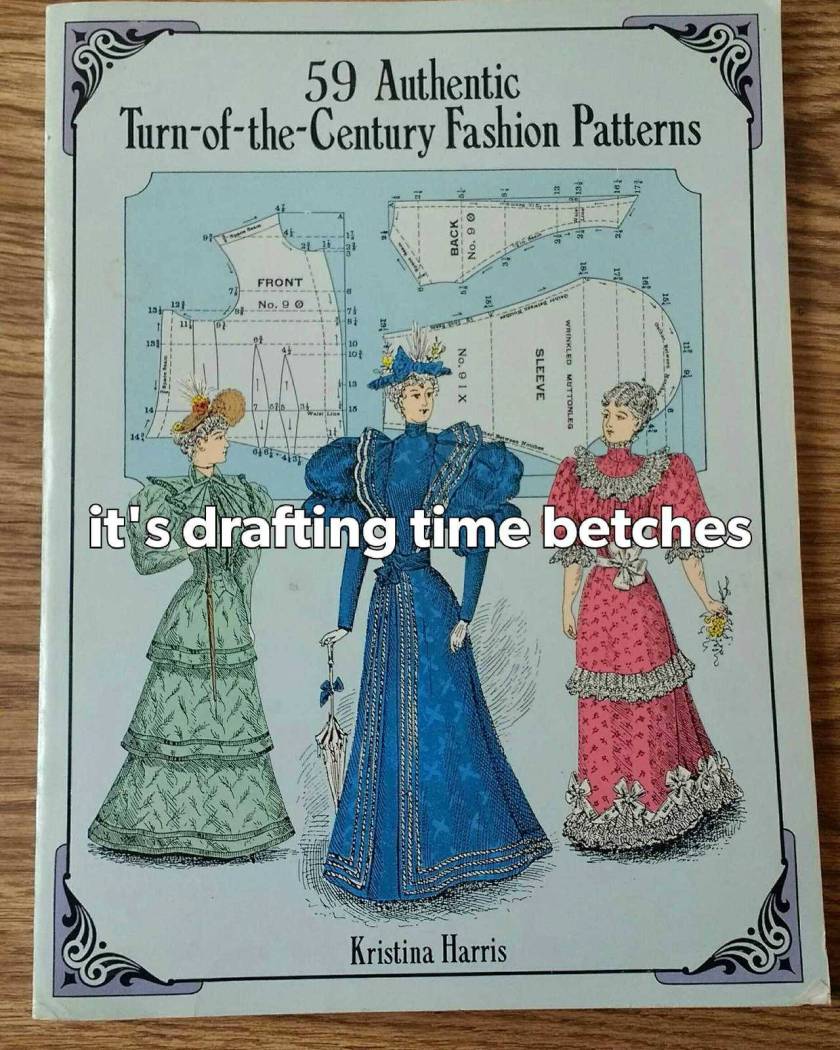 I’ve drafted patterns before – hell, I’ve taught pattern drafting – so I was reasonably confident going into the project. This book, though, raised the bar quite a bit. I came away feeling like I’d leveled up as a seamstress. A single project has never enriched my skills quite this much, and I can’t wait to try another pattern. I expect I’ll be practically superhuman once I get to the end of the book.

You see, these patterns, like most pre-mass-production ones, don’t come with instructions. Once you’ve traced and cut the pieces, you’re on your own. This was the first challenge: I went into the drafting without any notches or other indications of what went where, so I was forced to be that much more precise in my cutting. I confess I often skimp on seams I know aren’t going to be crucial or visible. (Doesn’t everyone?) This pattern didn’t make that immediately obvious, so I treated every seam like a potentially crucial one. That’s part of why this project took as long as it did. 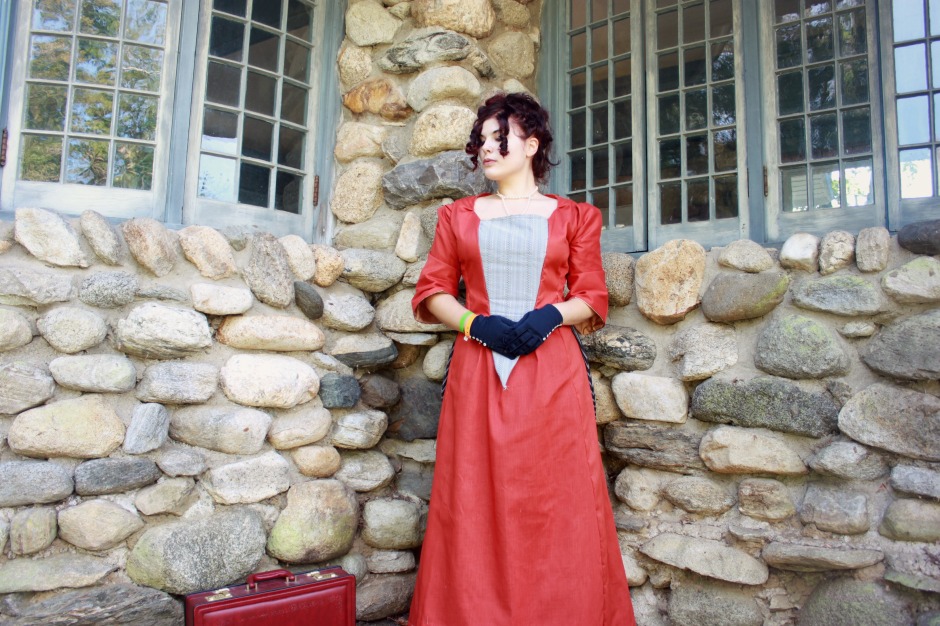 The other part is that I actually made a muslin – yes, another thing I usually skimp on. I’m pretty good at visualizing patterns in 3D and as such don’t usually need one, but I was taking zero chances with this. And I’m glad I did, even if posting about it now just reveals what a lazy seamstress I am! 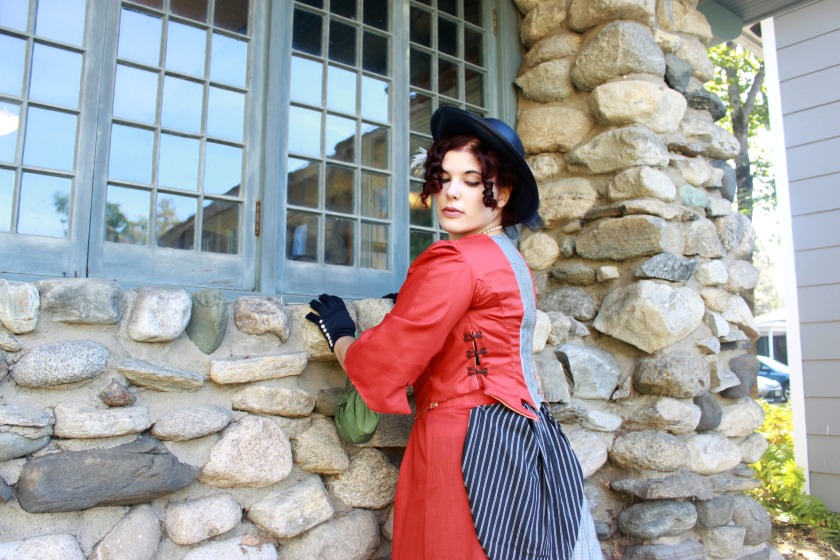 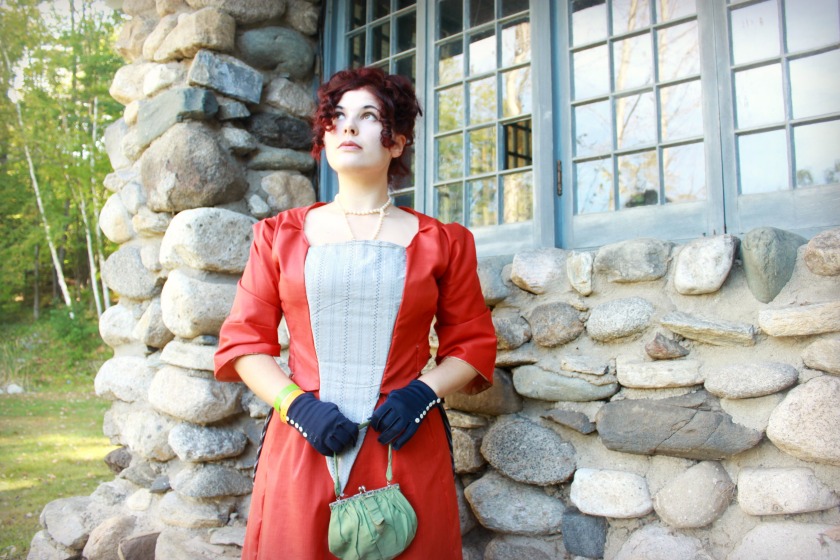 You can see from the final product that I went considerably off book. I’ve never met a pattern I didn’t want to modify, and I made no exception here. I can’t help it; I was terrible at rules growing up, and I’m no better now. Leopard, spots, etc. I lowered and squared the neckline – can’t stand high necks – and swapped the ruffles for a slight bustle. Between the stomacher (reinforced with cardboard) and the rear panniers, the dress ended up vaguely 1780s in shape. Not as explicitly Victorian as it could have been, but it’ll make a great peasant-rate robe a’langlaise should I ever get into Revolution reenactments. 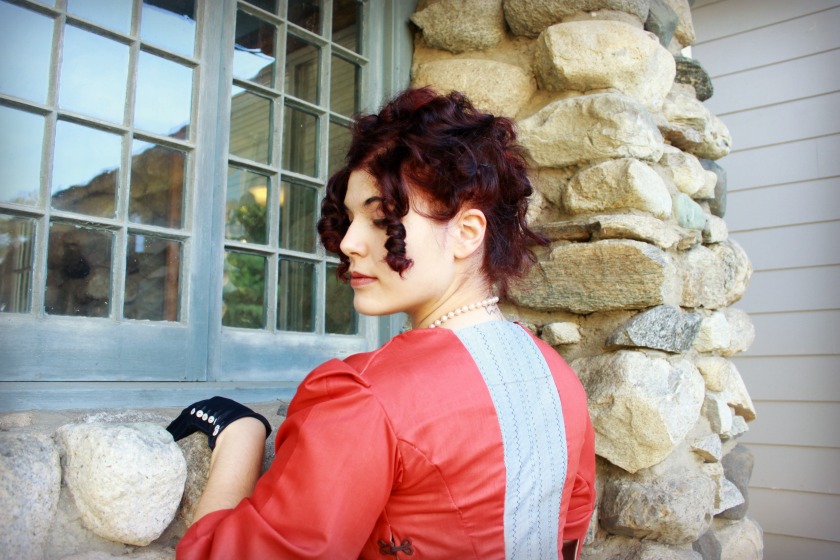 Plus, I think altering garments is truer to the spirit of authenticity anyway. It’s not like actual historical seamstresses never got creative. Maybe I’m cosplaying a Victorienne who happened to love the 1780s.

I finished the dress in time for the Springfield Steampunk Festival, where I wore it with an authentic Victorian petticoat and felt like a million bloody bucks. Looking at the photos now, I’m already seeing a million little flaws, but I still couldn’t be happier with my first-ever Victorian garment. Many more to come! The 1890s have an undeniable charm.