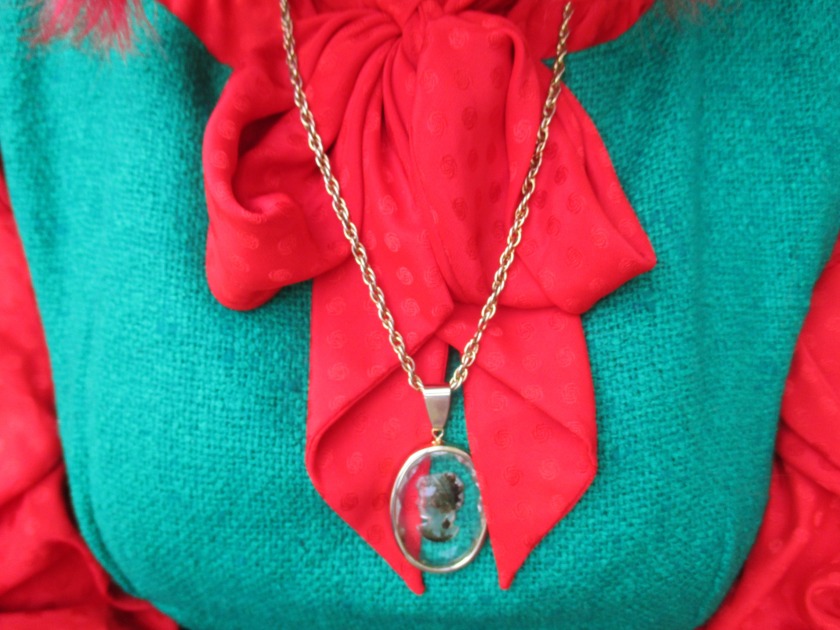 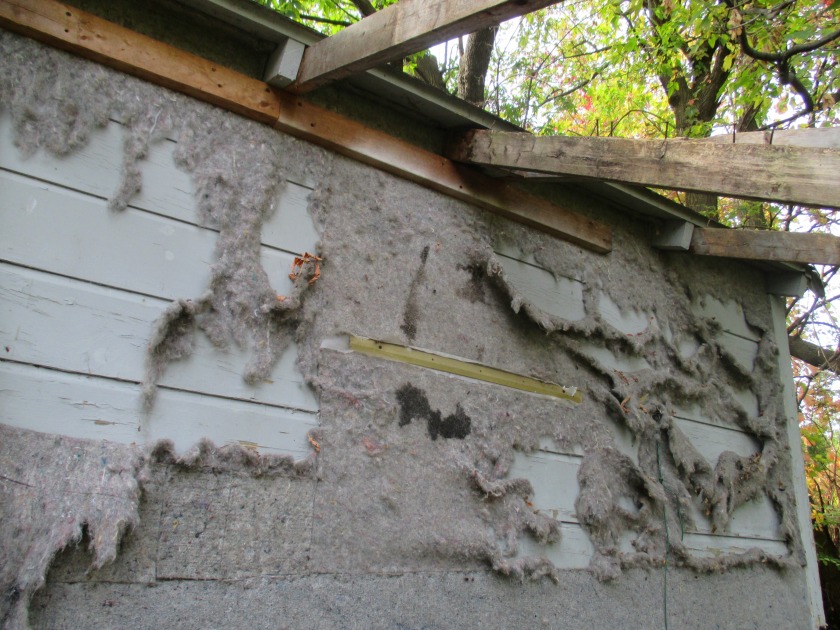 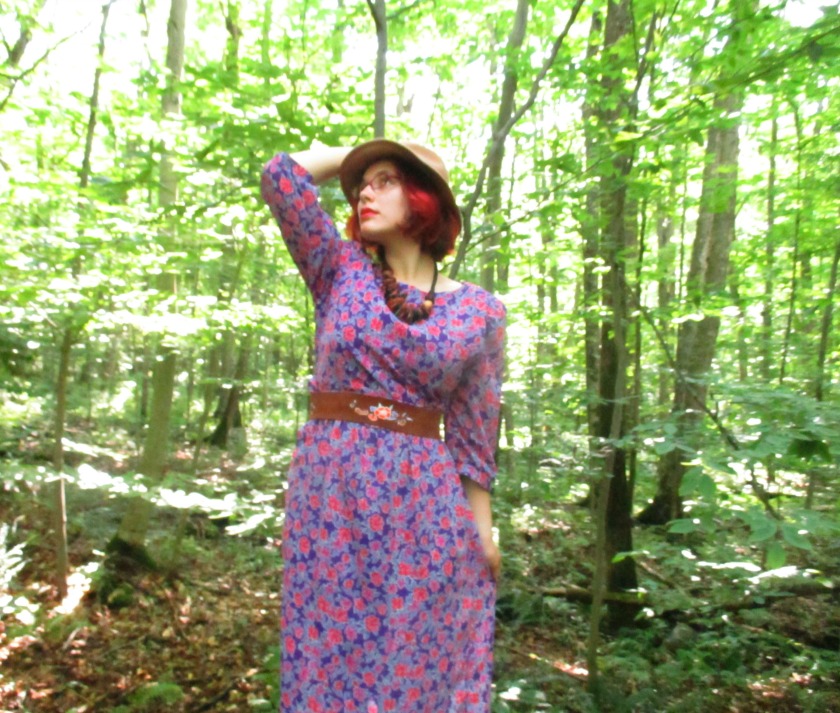 I’ve always been drawn to the “weird West” and “southern gothic” aesthetics and assorted paraphernalia. Spooky, ghost-dripping Americana tingles my spine and makes me yearn to crawl beneath the skin of the world, into the underbelly of fog and freaks. My mindscape resembles Deliverance, O Brother, Where Art Thou?, and a Flannery O’Connor novel. But only in the summer does this particular demon haunt welcome me: something about the way summer trees are just a little too ripe evokes its specter like nothing else.

(Before you ask: every other season has its associated ghoulies and ghosties, too. But this one has long been my favorite.)

Today in theatrics: the forest is just slightly too bright not to harbor some atrocity or other. I also pulled inspiration from Amy of Amy Flying a Kite, whose romantic prairie aesthetic often informs mine. 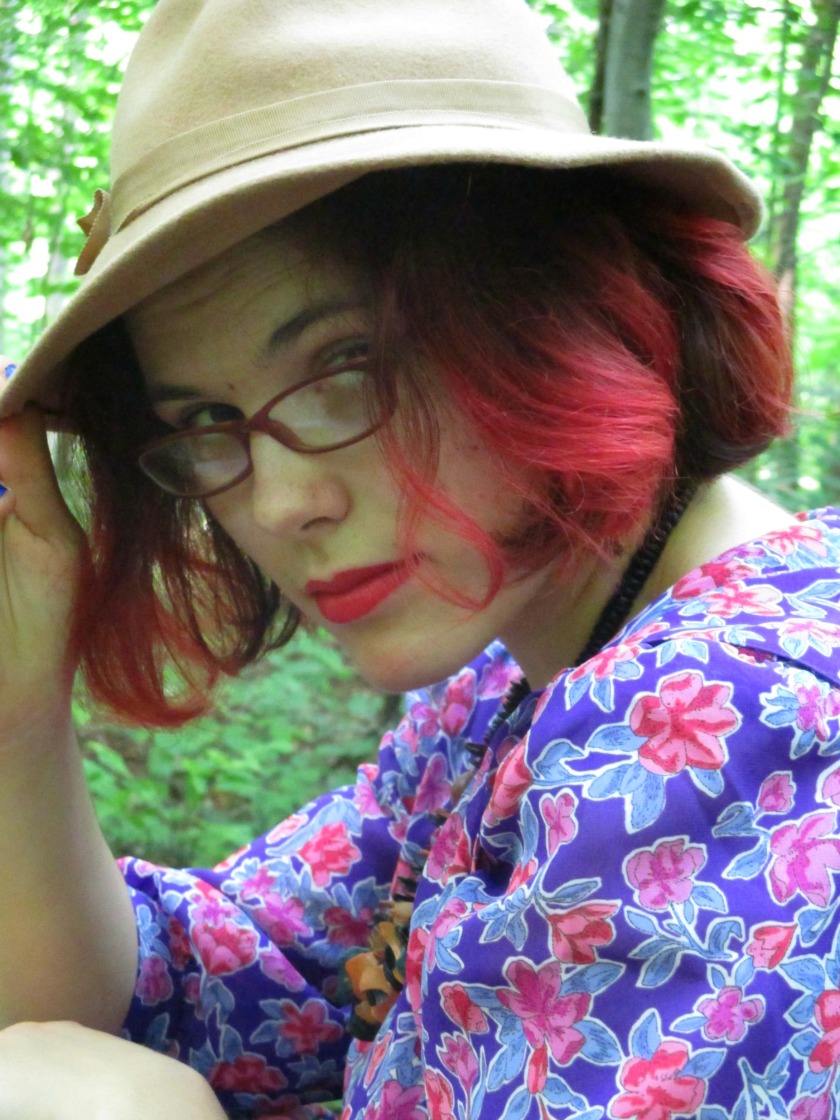 Weird West and southern gothic are all about queering traditional landscapes and mythologies. To find my place in that tradition, I (GASP!) modernized this prairie look a little with printed tights and generally eclectic accessories. As a costumer, I love exploiting and/or squashing expectations of a particular look, and today I did this by pulling the eye out of the past and a little more abruptly into the modern than usual.

And let’s be real: my pink hair always does that whether I intend it or not.

Also, if I have to choose between hewing to every period detail and setting the mood I want to set, I’ll usually choose the latter, even if it means a little imprecision.

Oh lord, these boots. I found them at Battery Street labeled only with the tag “very old boots!”. They’re so fragile they seem about to liquefy. One is missing most of its tongue. And they fit me almost perfectly. A little pinch at the toe is well worth it to wear a piece of history. 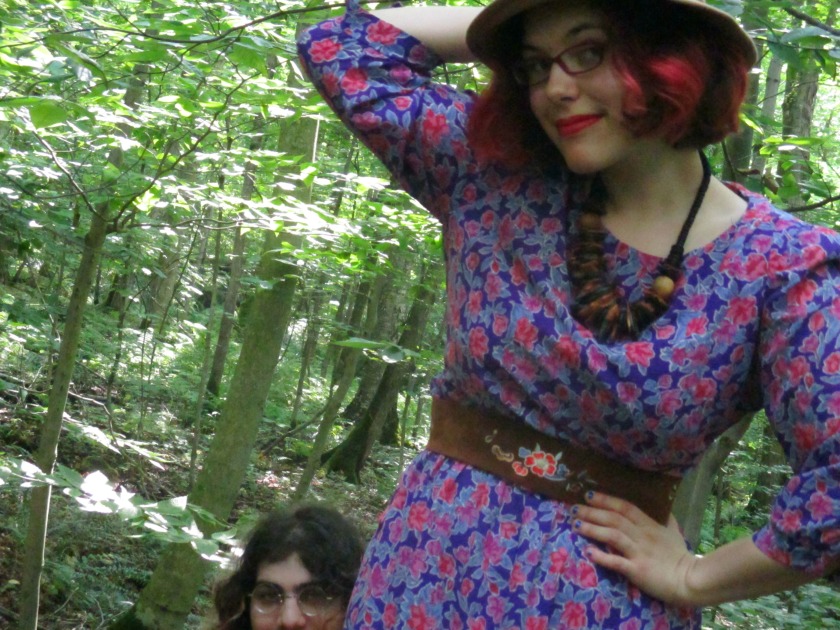 This is my pet gremlin. We call him Nick Teppelin. 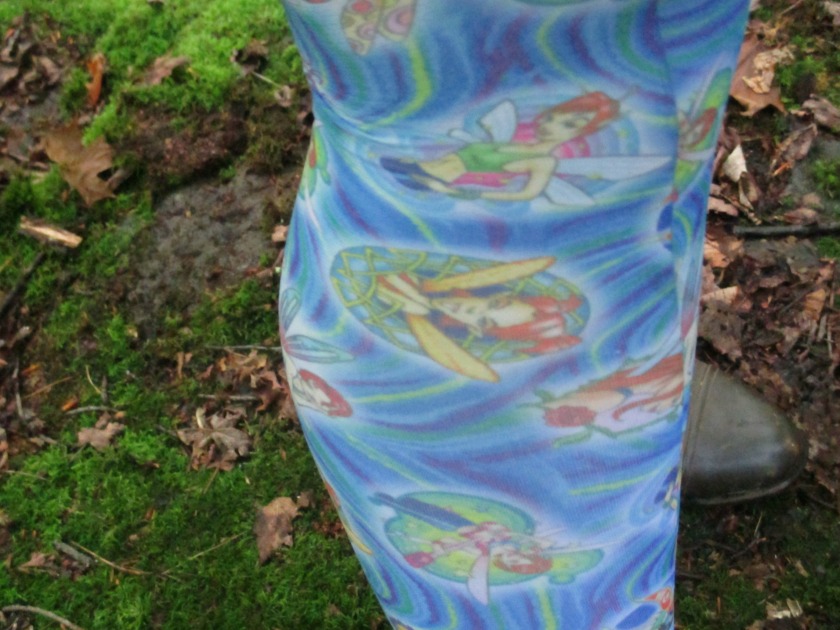 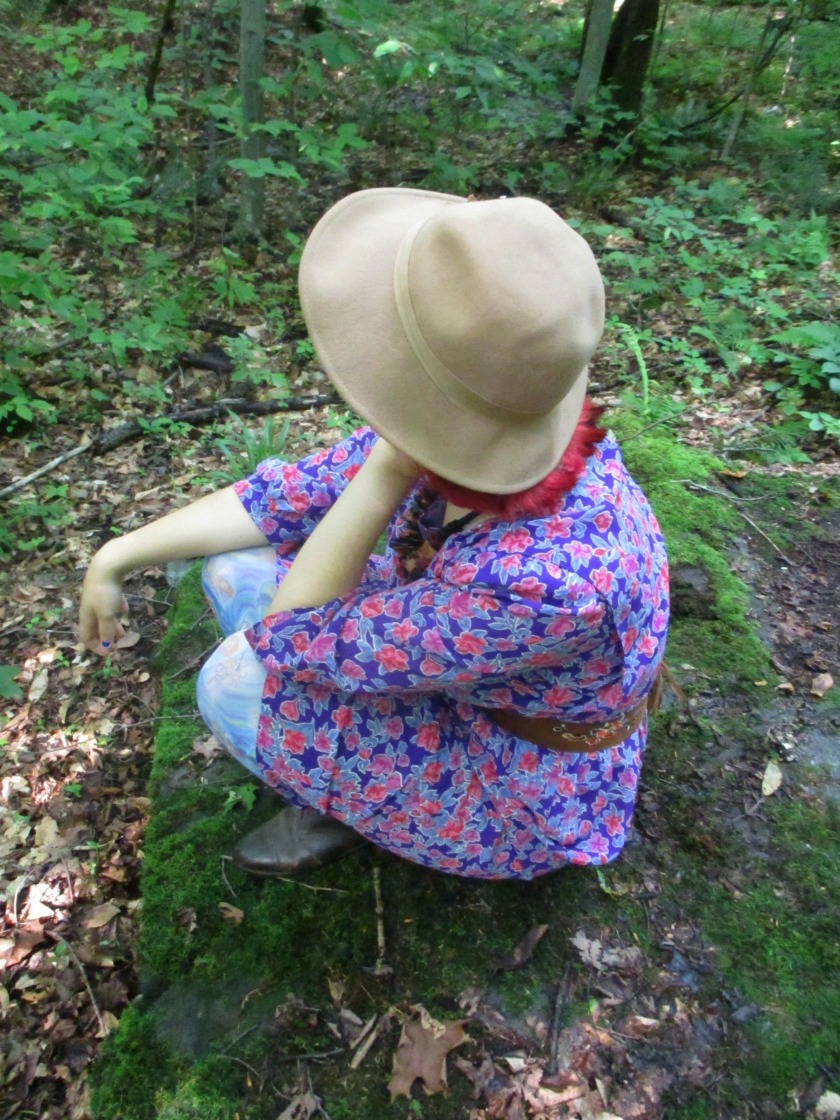 One of my favorite photos of myself ever.

I know. It’s hard for even me to believe. 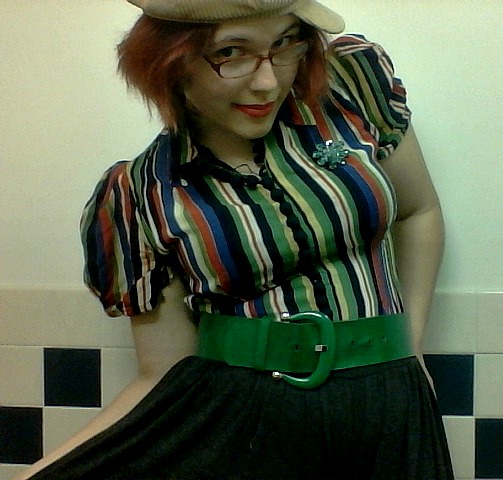 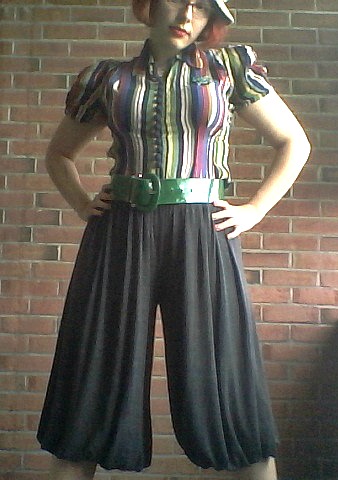 I wore these pants all the time in high school. I was also a lot skinnier in high school. The t&a I grew after graduation made me feel awkward in baggy clothes. My body’s found equilibrium, though. I no longer care much about “flattering” fits – I like interesting clothes, end of story. How they make my ass look is not a priority. 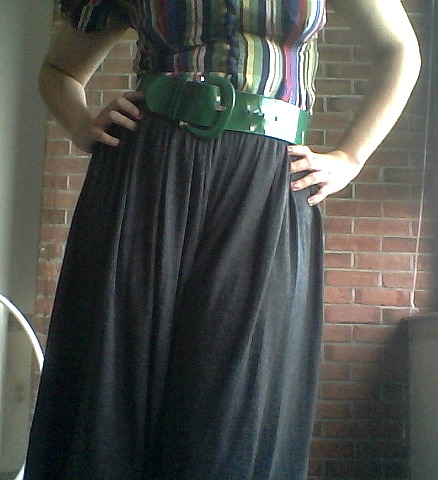 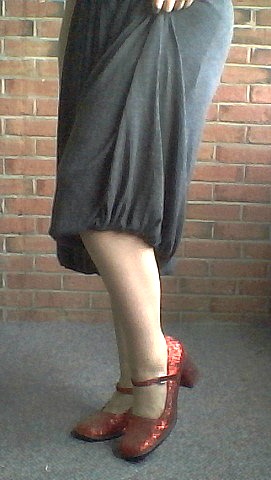 These are the comfiest heels ever designed. I suspect Old Gold heels are made for drag queens: they’re supposed to support a man’s weight, so they fit my flat, enormous feet.

I took these photos this morning, but they’re already out of date. I got my hair cut very shortly afterward. It’s bouncy and wonderful and the last of the nasty bleached bits is FINALLY gone. Pictures soon!

“You look like a gypsy,” said my friend who works at the shop across the street where I get pizza every day. Preach it. I wish I had a crystal ball.

I keep trying to believe the fact that not only did this sweater and skirt not come as a set, I got them at two different thrift stores. 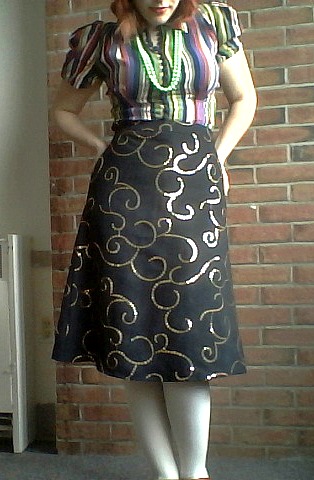 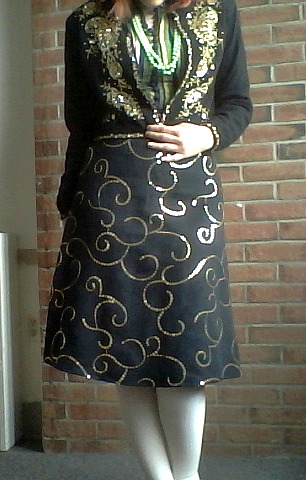 A friend of a friend referred to me by that very epithet yesterday. “Hey, Cassie, who’s that redhead with the polka dots I always see you with?” It’s nice to know I’ve got a buzz going, though it’s funny to consider how utterly distinctive I wouldn’t have been just a few decades ago. What was commonplace then is quirky now. In fifty years, skinny jeans and Ugg boots and bodycon dresses will be vintage.

Wearing pigtails every day, as you’ve perhaps noticed I have been, seems to have structured my hair into a natural flip. I can work with this.

I’m going to miss the pigtails when I get my hair cut (mostly) off in nine days. 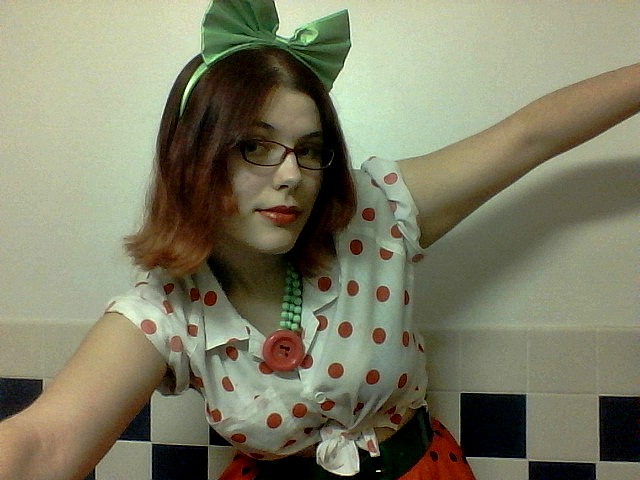 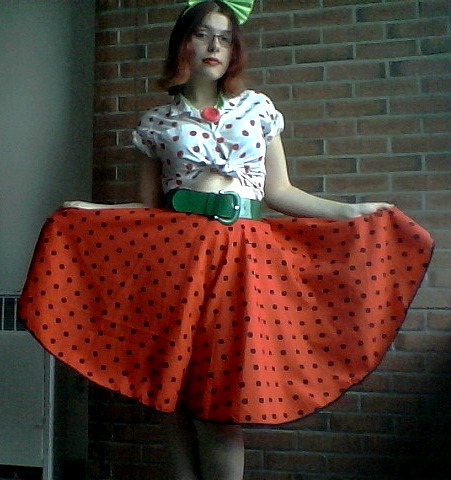 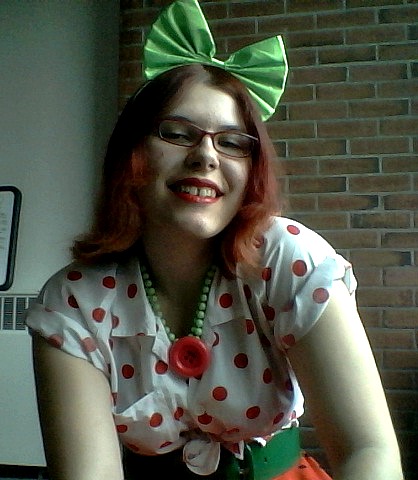 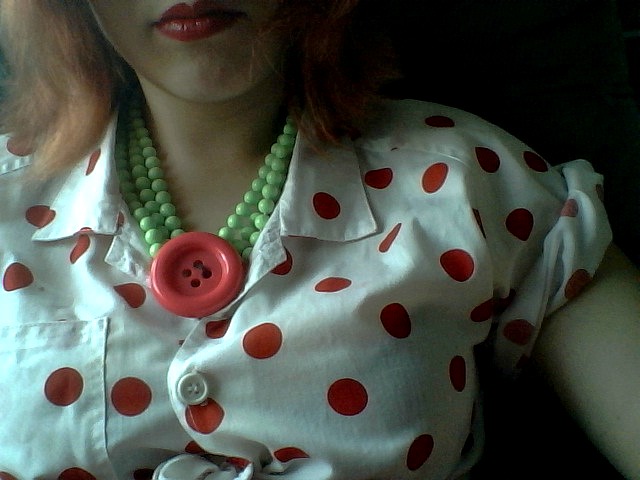 Here’s a squicky factoid about me: I have some issues with seasonal depression and anxiety. (Trust me, I’m squirming mightily as I write this. I don’t like talking about feelings. But it’s necessary in establishing a context for this post. And I’m consoling myself by remembering that it’s not feelings feelings, just misfiring serotonin.) I look forward to the January thaw weeks in advance. For a precious few day, I get an infusion of spring. Today it was fifty motherfucking degrees and smelled like awakening. I had me a little adventure down on the slowly thawing docks.

I’m truly sorry about the drawn-out atrocity that is this borrowed webcam. I should have my computer back by Monday. Until then, try to focus on the gist of the outfit and ignore the engorged pixels. 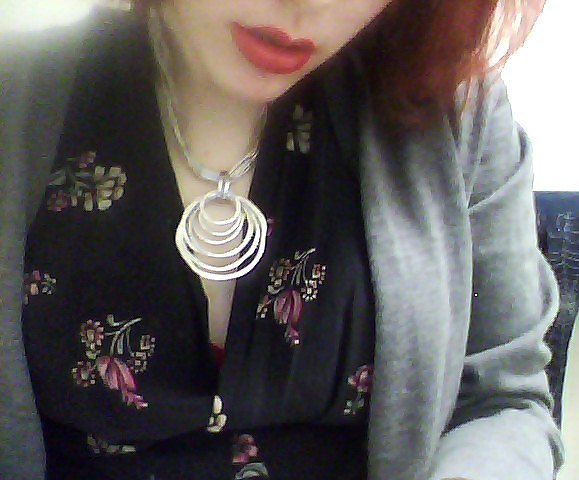 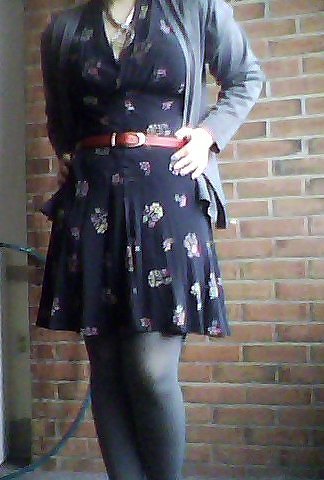 I’d been planning this outfit for a while. I liked the overarching theme of grey and red. All I was missing was the grey cardigan. Yesterday I found this one in the “free” box at Battery Street Jeans. 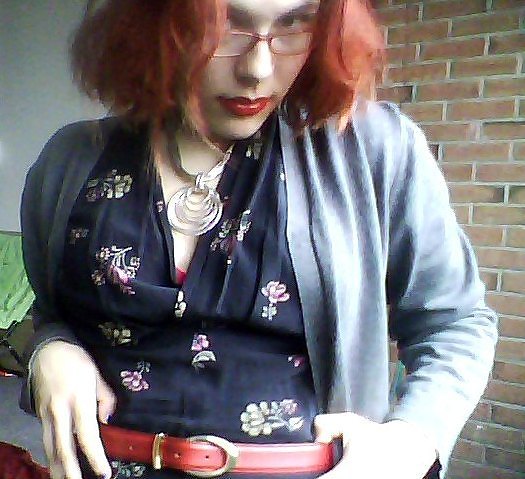 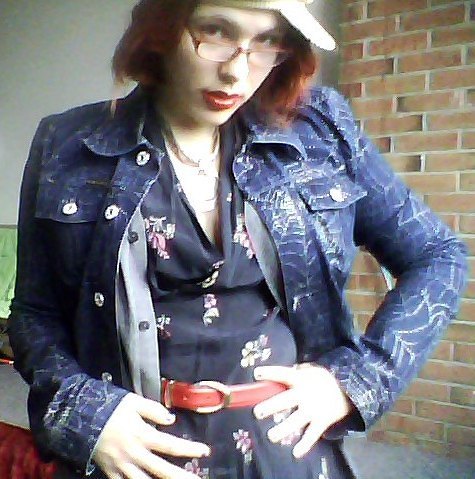 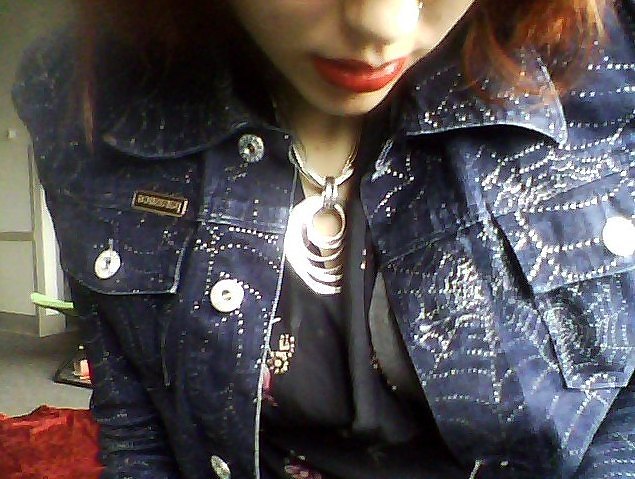 I took pictures of my dock-hopping:

Sometimes my city looks really bohemian. And I mean that in the literal sense. It reminds me of old Prague. 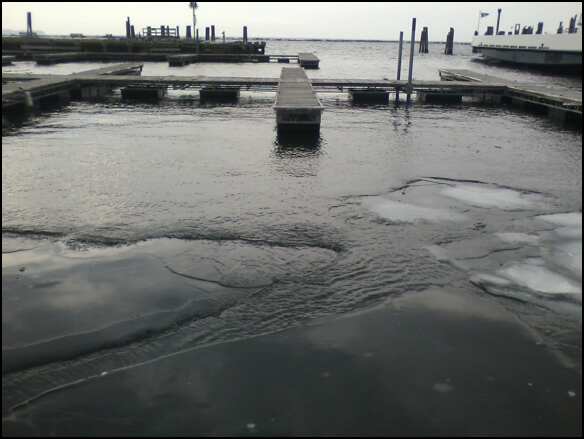 Half the docks were still mired in ice and half weren’t. The divide was almost exactly down the middle.

It’s a sad day indeed when my flip phone takes better outfit pictures than my webcam. 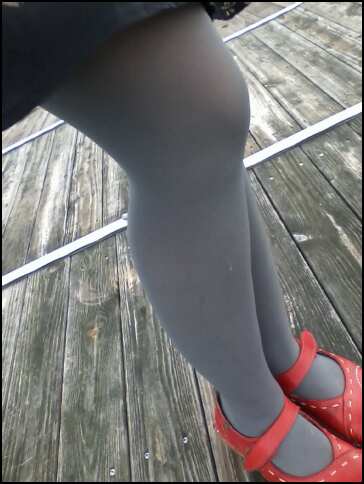 I want spring winds to follow me everywhere I go.

This is my favorite warm-weather song.