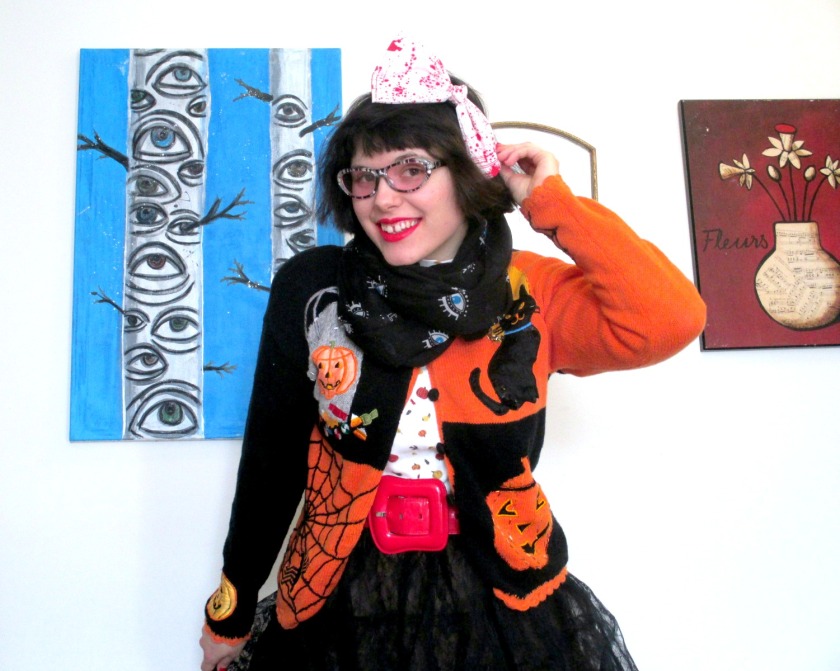 My friend Ruthless and I got our nails professionally done for her 21st birthday. The stylists refrained from rolling their eyes at our unseasonable choices. But it’s always Halloween for us, at least a little bit. We both serve on the production team of our haunted house, and we talked shop the whole way through our pampering. The haunt had its first meeting last night, wherein the director revealed the theme and we debated which animatronic monster to invest in. (I’m angling for something vaguely humanoid, for the record. Far more reusable.)

My new acrylics made me nostalgic for my favorite time of year. So in today’s OotD, I went full haunter. It’s high time I showed off this sweater. I got it in October and wore it faithfully through the end of the season, but it’s never showed up here. Granted, I didn’t have time for too many OotDs during haunt season, but a piece like this deserves all the love it can get. It takes pride of place in my ugly sweater collection. I want one for every holiday – yes, including the summer ones, dammit. 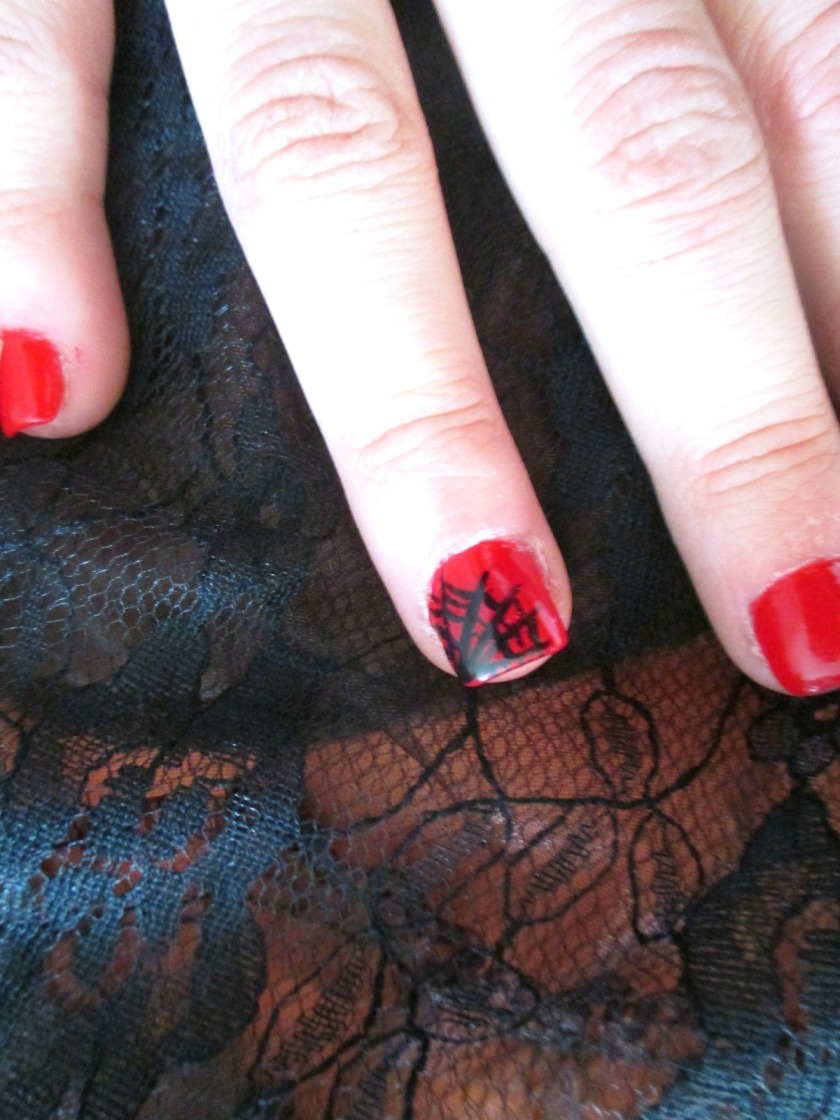 Can we talk about how I’m so not used to having nails longer than my fingertips? I’ve bitten them to nubs since I could chew. I have literally never experienced overhang of any kind. How do people live like this? After thirty seconds of fumbling, I had to ask the cashier to pull my debit card out of my wallet for me. I’m dreading the first time I have to pee – or, god forbid, change a tampon. 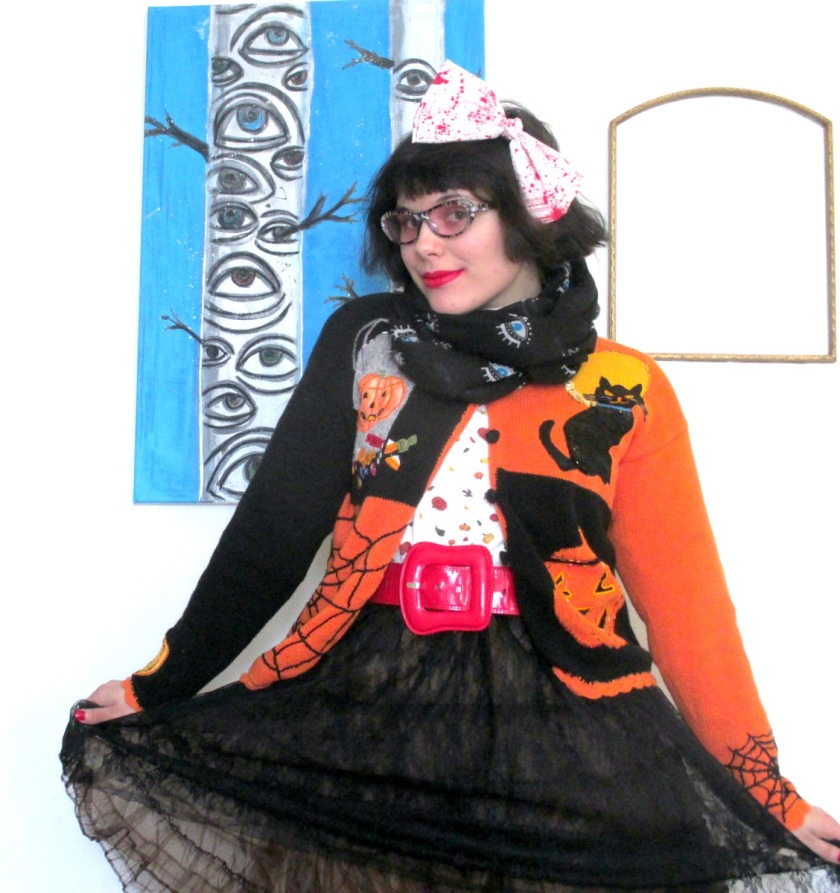 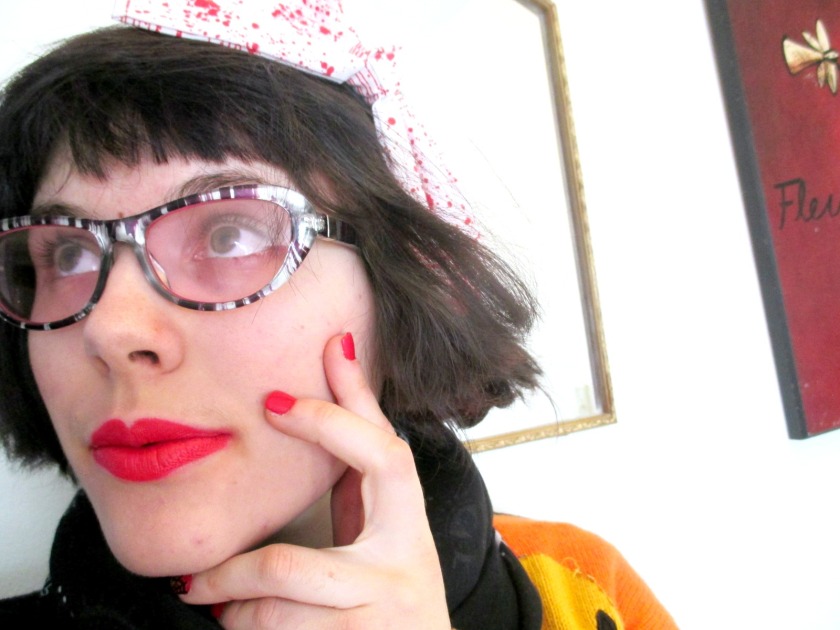 In other news from the “Skye’s passions” arena, I’m following Marlen’s lead and announcing that I’m working on a book! Two, actually. One is an anthology of short fiction based on fairy tales; the other is a memoir. I realize there’s something uniquely pretentious about writing a memoir after barely two decades of life, but believe me, I’ve got some stories to tell. My life tends toward the bizarre.

Storytelling is my first and foremost love. I’m one of those people who’s always writing a novel. I actually completed two in middle and high school – not that I’d ever let them see the light of day in 2014. As I’ve gotten more established in my journalism career and started getting my essays picked up, I’ve left a lot of my own projects in the dust. And I want to remember how to write for the sheer mad joy of it, not just because I’m on a deadline. 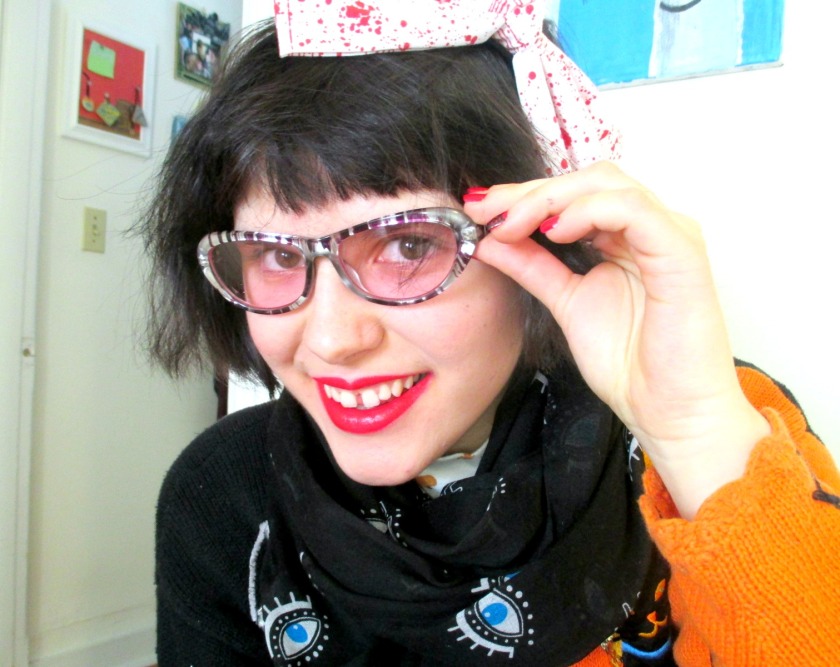 And because I’m a tease, enjoy an excerpt from one Once upon a Dream, of the short stories in my anthology.

“Aurora,” Adia asked one morning, “what’s become of your body while you’ve been here?”

“The usual, I’m sure. I never lived in it much anyway. Why should it matter that I’ve vacated for good? I’d wager no one can tell the difference.”

“You are alive here,” Adia agreed. “You’re potent just this way, slithering through my blood every night. A whole body would only dilute you. You’re better as a spark, a seed, a notion.”

Adia was beginning to picture Aurora’s face. The noble girl’s features ran through her blood. She was fair and sharp and cunning, with smooth eyes that couldn’t hide her cleverness. She was the lace to Adia’s linen, the bloom to her fade, the daughter who had somehow survived. She was perfect.

Aurora set up camp in Adia’s head that night, and gave her dizzying dreams she didn’t remember. 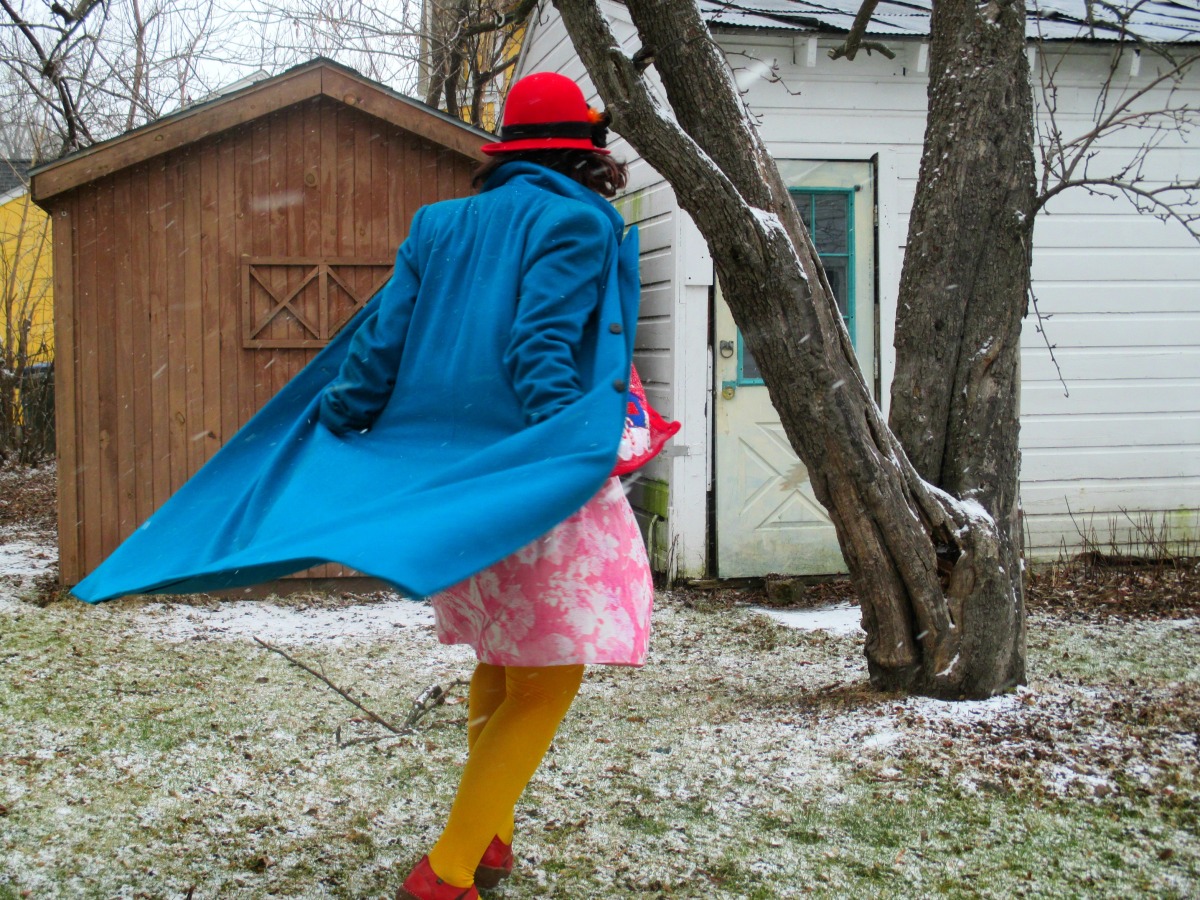 Say what you will about the dogma behind it – I really $&*$ love Christmas. No matter what you believe, having a huge-ass celebration during the darkest time of the year can’t not be good for you. The ancient pagans knew what’s up. Crit-failing at serotonin production? Make your own, via light-up trees and garish sweaters.

Fortunately, I don’t have to rely overmuch on color lately. My life is knit with other joys. It’s been over six months since I left college, and I’m actually starting to make something of myself. I’ve settled into my “jill of all trades” status, and I’m seeing success on a few different fronts. My Prague Revue column is up and humming along. My poem “wherein we luminesce” is currently enjoying the front page of Cowbird. Later this month, my short story “How to Leave a Cult” will be published on elephantjournal.com. And I spent much of today revamping my Model Mayhem account and creating a Facebook page for my modeling persona, now known as Gloria Mundi. There’s so much in my head – so many dark, glitzy, gritty nascent explosions – and I need as many media as I can possibly find.

Also, I would like to start going to church. Any church – I’m not married to any dogma or other. I just enjoy being in the presence of people who believe in something with their whole selves. I guess I’m religious by proxy. I’m drawn to all faiths, regardless of my personal opinions on their doctrine. I’m not in school anymore, but I loved being a religion major, and I’d like to carry that into my post-college life. 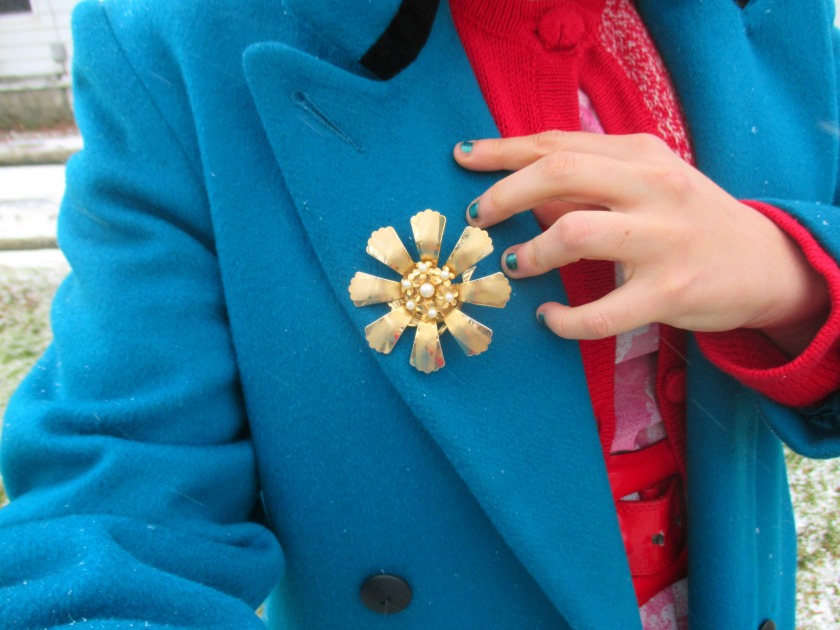 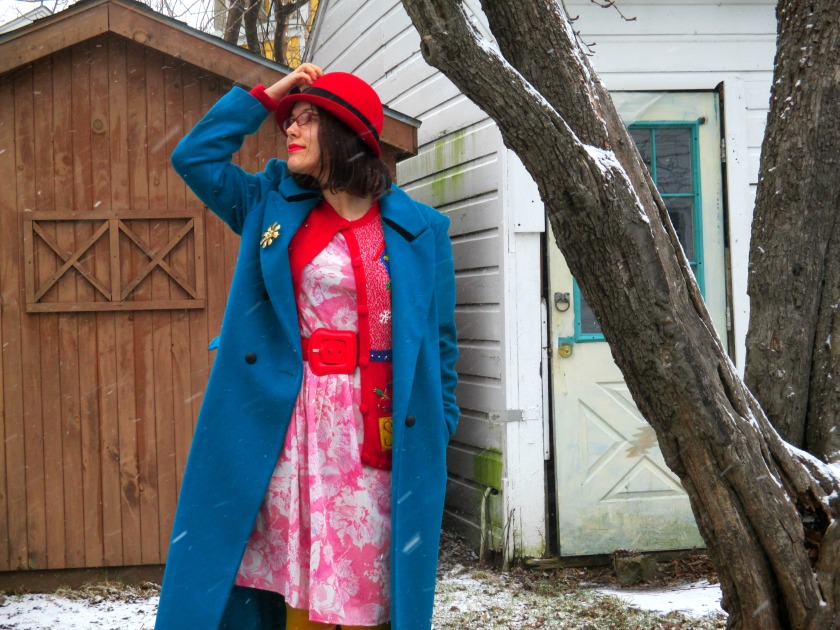 And I’m doing it all while dressed like a goddamn sideshow act. 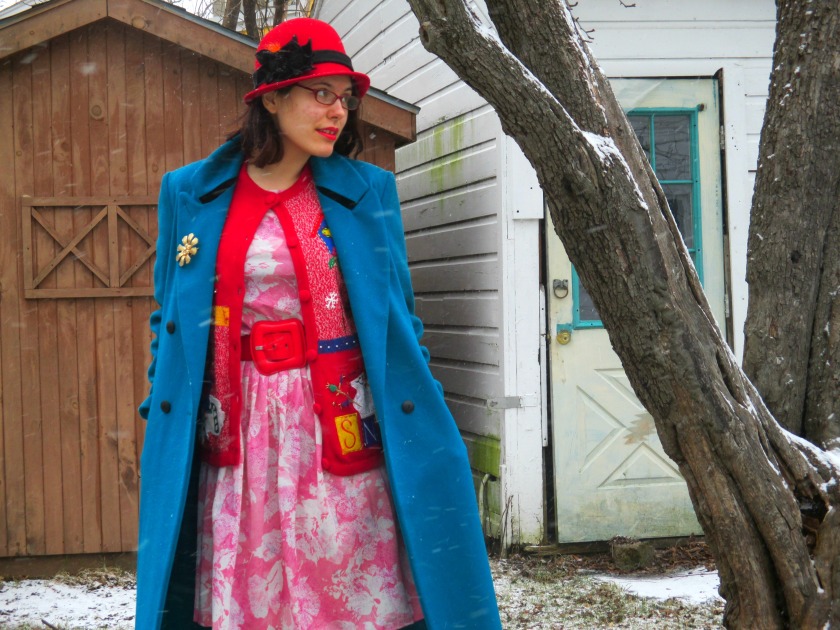 I might dress like I’m sophisticated, but I grew up in a town of 1,800 people, and I’m way too easily impressed by things like wireless internet, hands-free phones, and indoor plumbing. I’m also the kind of person who walks into doorjambs and knocks her glasses off. It’s a contrast my friends and family do not let me live down.

If you’ve ever wondered what I’m like in person, this is a pretty good indication:

The ugliest sweater known to Sartoria. I’m madly in love with it. I’m not even wearing it ironically.

I’d wanted a really hideous sweater for about a year, and my mom got me this one on a business trip over Thanksgiving break. I’ve been waiting for the perfect time to blog it.

My mock trial team had an “ugly sweater” party tonight, and I think I won the party. I’ll post the pic of my team as soon as my captain uploads it. 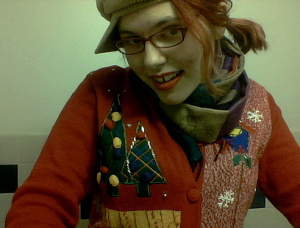 I feel really pretty today, because I am so happy to be wearing this sweater and it shows in my face. 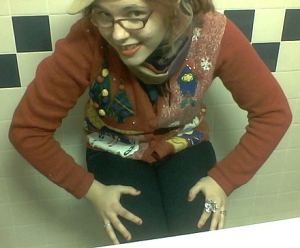 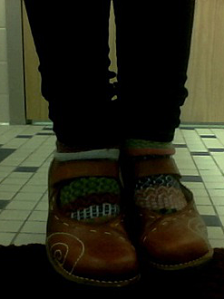 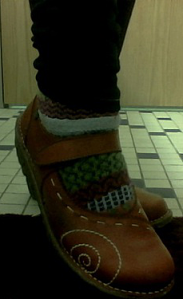 I’m in the holiday spirit from head to toe. I feel like a Scandinavian child.

This time of year is bliss for someone who loves classical music as much as I do. This has been on repeat for the past hour.

Also, happy Hanukkah! My Jewish boyfriend tried to teach me how to say it in Hebrew, and I promptly forgot. I kind of suck at languages that aren’t Latin.

UPDATE 12/11: Here’s my mock trial team (the ones who remembered to dress up, anyway) in all our finery! 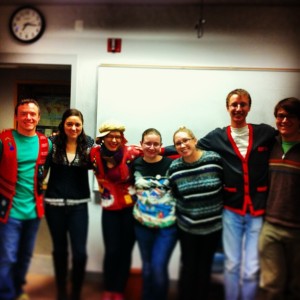