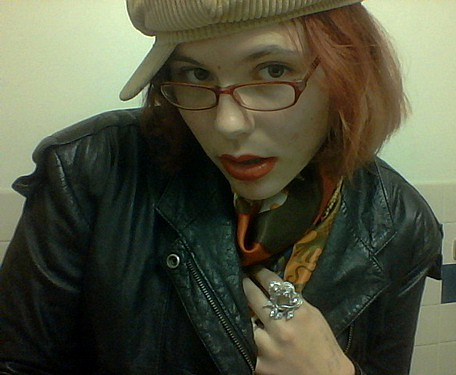 In the summer, I teach children’s theatre. While I was home on break, my neighbor announced on Facebook that she was giving away a massive box of children’s costumes, and I bolted over there. Not only did I procure a preponderance of props for my young thespians, I found this jacket in the bottom of the box. Genuine leather. I sincerely hope she meant to give it away and won’t come asking for it back.

I couldn’t decide which scarf I preferred, so I’ve interspersed two different photosets. Comment and state your preference! 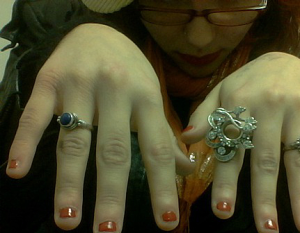 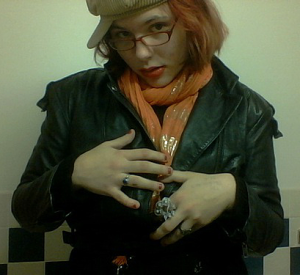 My mom wore stuff like this when she was pregnant with me. Yes, in the early ’90s. Somehow I’ve internalized it.

I really, really like slouchy materials with crisper ones. The metallic rings contrast the baggy sweater nicely. And the leather pulls it all together.

I bought jeggings. Secondhand jeggings, at that. Let’s face it, though: I was already wearing leggings as pants; this is the natural next step.

This scarf is admittedly slightly ratty, but it photographs really well. 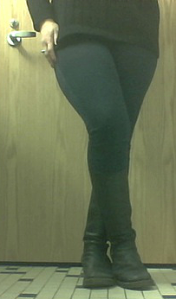 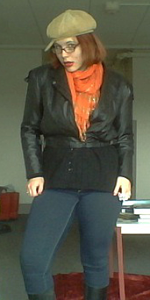 I’m in love with these textures together. 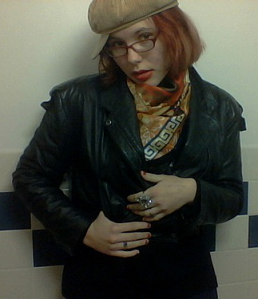 You get some music today! Because most of this outfit is from Battery Street Jeans, I’ll post songs I first heard there. They spin some really excellent music.

5 thoughts on “pretending i live in an actual city”